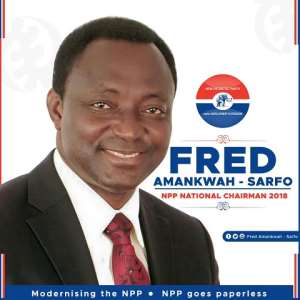 Fred Amankwah Safo, a New Patriotic Party (NPP) chairman hopeful has withdrawn from contesting in the upcoming NPP elections. The party Big Wig who made his intention of contesting for the prestigious position last year, today rescinded his decision and made it known that he has decided not to contest again.

Just yesterday, suspended party member Sammy Krabbe also announced that he will not be contesting again after Hajia Fati vowed not to let him pick up forms last week because he had been suspended since the 2016 elections and thus had no right to pick up forms.

Some months ago, Fred Amankwah Safo sounded very confident about winning the election but today whiles addressing the media at the NPP office premises at Assylum down, disclosed that after careful considerations, he has decided

“Last year I declared my intention to contest for the high office of the National chairman. I decided to contest and win. After a year of assessing my chances, after going round, after speaking with the rank and file of the party, after speaking with major stakeholders of the party, today I have come to the conclusion that I am not contesting the election as the national chairman and want the media to know. Today is the last day of forms and am not contesting. I have withdrawn my candidature as a national chairman for New Patriotic Party for this year”, he explained.

He however debunked assertions and suggestions that he was forced to go back on his decision and not to contest anymore. He rather emphasized that he took the decision because for now that is the best thing to do.