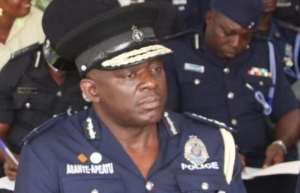 Following the several high profile killings just 17 days into the New Year, a retired Police Officer, who previously served as Police Director of Operations, has admonished Ghanaians to take their personal security seriously.

Chief Superintendent Felix Koku Mawusi to him, this is “paramount for individual and community security.” He suggested that personal security starts with being deliberate about one’s safety.

His comments follow a Myjoyonline.com report, culled from Graphiconline.com that an undercover investigator and a key member of Anas Aremeyaw Anas’ Tiger Eye Private Investigations team, Ahmed Hussein-Suale, has been shot dead.

Ahmed was shot three times, twice in the chest and another in the neck late Wednesday night at Madina in Accra while he was driving home by unidentified men on a motorbike.

This comes five days after Myjoyonline.com had again reported on the murder of a Ghana Ports and Harbors Authority (GPHA) Staff at the Tema Port, who was murdered in her home. The Marketing and Public Affairs Manager, Josephine Asante, was stabbed to death at her residence at community 25 in Tema.

The incident according to a source at GPHA, the deceased had returned home from a Senior Staff party when she was murdered. Madam Asante is alleged to have been attacked in her bedroom on Saturday night.

These murders including the recent murder of the Tema Community Four Central Assemblies of God Church’ Pastor ’ Rev. David Nabegmado in a similar fashion has become a source of worry for many Ghanaians.

Speaking on the Joy Super Morning Show, Chief Superintendent Mawusi said on Thursday that “these occurrences are not to say we are not safe. Robbery and other crimes are bound to occur. Our reactions to these are what is more important.”

He adds, “personal security is important. We must do conscious things to get to that condition. Once you do that it puts you in place to delay attacks on you and minimize risk one is likely to face.”

To proceed on personal security, the security expert suggests that you “must always be able to assess your environment and determine your safety and be equip with that information.”

He proposes, for instance, that once you enter a building “identify threatening issues. Look for an alternative routes, consider if you can jump in case of an attack.

“That is not all,” he adds that “you must be able to detect smoke and whether people around you are dangerous.”

To detect whether a person has ill motives to harm you, he gave clues that such “people will not be very cool and comfortable if they want to stab you to death. They will be tense and nervous.”

He adds that the suspected attacker may be “putting his hands in his pocket. Those who want to harm you will not be relaxed and comfortable.” he added

Chief Superintendent Mawusi, who now operates his private consultancy, Affirm Consulting Limited, further admonished persons who encounter suspicious people in dark places and said not be nervous but bold and confident to ward off the attackers.

When in dark places, he advises, “Don’t have an earpiece in your ears. Don’t carry things in your hands. Walk very confidently and maintain eye contact which means boldness and courage. Showing signs of fear will encourage your attackers. Be bold.”

The security consultant concluded the security tips by adding obedience to one’s instincts as a key tip to personal security. “What are your feelings telling you about your environment, about the person or about a situation? Obey your feelings at all times.”