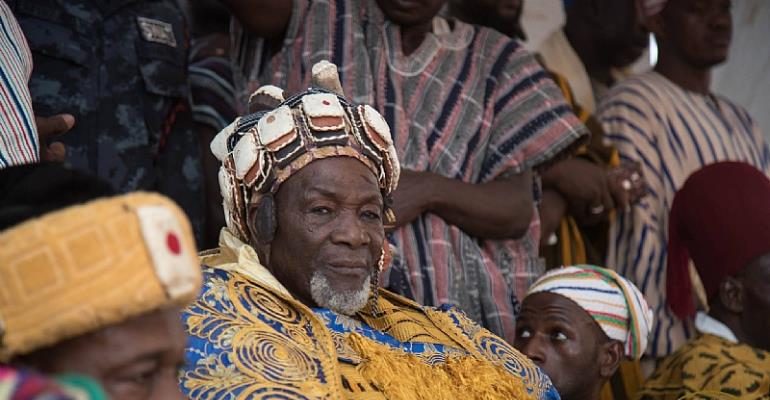 Our majesty the new YAA NAA first settled in Puriya as a peasant farmer and later was made a chief of a small village called Kpunkpono.He was with the title kponkpo NAA. A village that most of us have never heard of.

When Naa Yakubu Andani died in 2002 never did any of us thought there will be any other person to this throne(YAA NAA) aside the two regents KAMPAKUYA NAA and BOLIN LANA.The new YAA NAA possibly in his life never ever also though he could be come the YAA NAA of DAGBON though qualified as one time the son of a YAA NAA.

Remember, per the ruling of the otumfuor committee, Kampakuya Naa was never to enskin any one as the chief of any town or village in DAGBON kingdom. He defied the committee and went ahead to enskin some vacant chief skins, among them was the savelugu skin.Our new Yaa NAA then contested for the savelugu vacant seat to which he was chosen and enskinned by the Kampakuya Naa.

Our New YAA NAA did this without the thought of becoming the Yaa NAA of Dagbon. Later on with the committee, an idea was arrived at, that DAGBON customs be used in arriving at the YAA NAA. And looking at the vacant positions of Mion and Karaga the only qualified for the Yaa NAA was no other person but NAA Abubakari Mahama,the once chief of kponkponaa a village known by few.

The Oracle kept us all in limbo in search of the rightful person to the throne. Will I therefore be right if i say all this time the Oracle was at play with with the game of chess with us to given us a YAA NAA? I say this with some thoughtful quotes from the game of chess below

“Every chess master was once a beginner.

Chess is the struggle against the error.”

Chess is a war over the board. The object is to crush the opponent’s mind.

The blunders are all there on the board, waiting to be made.

One doesn’t have to play well, it’s enough to play better than your opponent.

The past years has seen all the above happening like the game of chess and all I can say is that today we have love,music and we all are happy.We also have the past years learnt a lot about Dagbon that one can derive both inspirational and moral lessons from. I am not sure there will be any other issue not solvable in DAGBON.

Dagbon is finally united. The enskinned is now going to eskin the eskinner without any issue. ( Something not usual but happening in DAGBON with a common understanding)

Long live Dagbon, long live NAA GARIBA and may the ORACLE again give him the wisdom to make dagbon a prosperous kingdom. The ORACLE is wise!