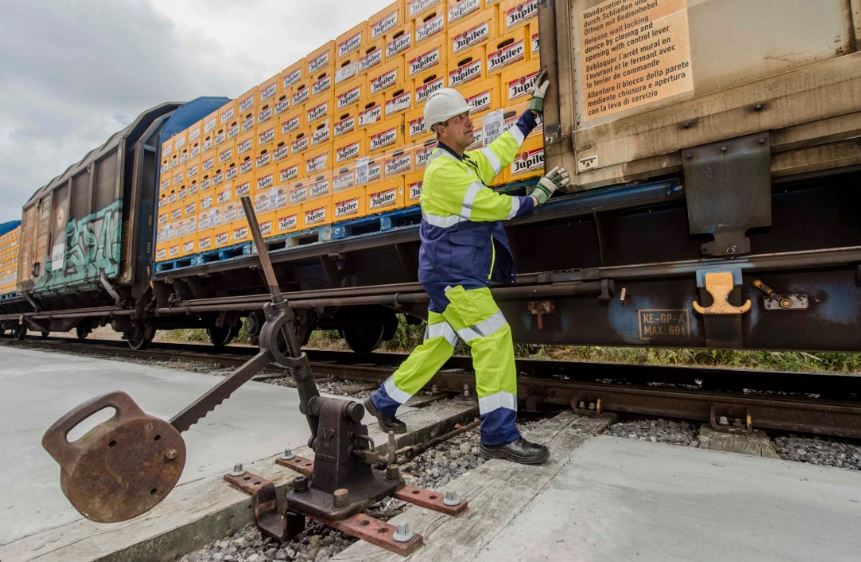 Using a train will be both faster and more ecological than transporting per truck. Credit: AB InBev

AB InBev, the American-Belgian multinational drink and brewing holdings company based in Leuven, will organise the largest part of their transport to and from the port of Antwerp by train starting from 2020.

The Leuven beer company transports millions of hectolitres of beer to the Antwerp port, where it can be exported to over 100 countries. The beer trucks arrive at Katoen Natie on ‘rechteroever’ (the river bank on the right side of the Schelde river), and have to be transported to the other side on ‘linkeroever’ (the river bank on the left of the Schelde) where they can be loaded onto the ships.

The new ‘beer train’ would replace 5,000 trucks going from rechteroever to linkeroever on the Antwerp ring road, starting from 2020. The train can carry the same load as 47 trucks. Another beer train already existed for the route, but it had several stops in between the two locations, but this will be a direct connection.

Using a train will be both faster and more ecological than transporting per truck, according to AB InBev, reports VRT NWS. The CO2 emissions per rail transport would be around 75% lower, despite still being pulled by a diesel locomotive due to the lack of electricity above the tracks in the port.

Additionally, rail transport would be faster and more reliable than trucks seeing as traffic jams will be avoided on the busy Antwerp ring road.

“The train is a nice initiative,” said Thierry Van Elslander, transport economist at the University of Antwerp. “However, 5,000 trucks less on the Antwerp ring road is only a fraction of the 25,000 trucks going in every direction.

“5,000 trucks are only a fraction of the number of trucks, because 25,000 trucks are driving in every direction on the Antwerp ring road. This is only a drop in the ocean,” he said on Radio 1. “However, it is an important symbolic drop,” he added.