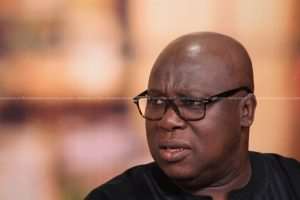 Greater Accra Regional Chairman of the National Democratic Congress has said his party, cannot work with jEAN aDUKWEI Mensa who has been nominated to chair the Electoral Commission.

According to him, President Nana Akufo-Addo by his appointment of the new EC officials is gradually plunging the country into chaos.

Mr. Ade Coker said as a major stakeholder the NDC should have been consulted before the Jean’s Mensa’s appointment.

“If we are not careful and we start this kind of trajectory, we will end up breaking this country. Let us be seen doing the right thing. We are not going to work with her [Jean Mensa ]. We will get there [elections 2020] we will cross the bridge.”

Speaking on Citi TV’s Breakfast Daily show, Mr. Ade Coker likened the NDC’s stance on the new EC appointments to a football match were one team refuses to play because they have unresolved issues with the officiating referees. He says it is impossible for the NPP to go Elections 2020 alone.

“How can you a football match and one of the teams say we don’t want the referee and the team doesn’t play the match. How can you play the match? You will it play alone. Let’s be serious; we are major stakeholders. We have come a long way. 25 years of political dispensation. Let’s not truncate it.”

Citing a citinewsroom.com publication in 2015 when the then Flagbearer of the NPP called on President John Mahama to be transparent in the appointment of a replacement for the outgoing EC boss, Mr. Ade Coker said President Nana Akufo-Addo with the appointment of Mrs. Jean Mensa had taken the same actions he advised Ex-President Mahama against.

He also said Mrs. Jean Adukwei Mensa is a card-bearing member of the NPP hence not fit for the EC top job.

Former President John Dramani Mahama in a tweet yesterday [Tuesday, July 24 ] described the nomination of four new officials to the Electoral Commission as a “regrettable” decision by President Nana Akufo-Addo.

According to Mr. Mahama, the controversy surrounding the removal of Mrs. Charlotte Osei and her deputies and the subsequent appointment of Mrs. Jean Mensa and two other deputy commissioners and a commission member is a potential threat to Ghana’s democratic credentials.

This was after a committee set up by the Chief Justice, Justice Sophia Akuffo, under Article 146(4) of the Constitution, investigated separate complaints of procurement breaches and financial malfeasance brought against the three persons by some Ghanaian citizens including staff of the Electoral Commission.

The Committee recommended their removal on the basis of stated misbehavior and incompetence, under Article 146 (1) of the Constitution.

Replacements named
On Monday, July 23, 2018, the Presidency announced the nomination of the Executive Director of the Institute of Economic Affairs, (IEA) Jean Adukwei Mensa as the new Chairperson of the Electoral Commission.

Meanwhile, the Progressive People Party (PPP), have also accused President Nana Akufo-Addo of failing to consult political party representatives before the appointment of the EC officials.

In a statement signed by the National Secretary, Murtala Mohammed, it said the appointment of the new EC officials would have “passed the litmus test of transparency, good governance, and best practices” if they were consulted.