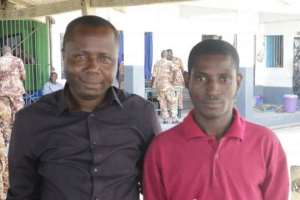 The Management of Crime Check Foundation (CCF), a correctional facility focused NGO, has facilitated the release of an inmate of the Winneba Local Prison.

Mr Ibrahim Oppong Kwarteng, the Executive Director, CCF, told the Ghana News Agency that the NGO facilitated the release of the inmate with support from Mr Shem Rich Owusu, a Ghanaian based in the US.

Mr Gabriel Agyemang, a basic school teacher based at Asankragwa was convicted on various counts for defrauding, an aspiring assemblyman.

Mr Agyemang was convicted to a fine of GH¢2,800 or in default serve a six-year jail term.

Narrating the sequence of events that led to his conviction, the inmate said, his assemblyman friend gave him money to assist in registering a football team, as part of his campaign strategy to bring the youth on his side.

He said when he got to the office, where the registration was supposed to be done together with him, they saw an individual who offered to help, where after some negotiations they were paid GHC 350.00 as part payment.

He said he had a text message from the said individual who they later got to know was a “goro boy” to come pick the certificate for the registration.

He said he left Asankraagwa, the following day to where the registration was done and where his friend resides, but could not locate the so-called goro boy.

He said it was at this moment he realised the extent of the situation, so his friend gave him a room to sleep and at dawn, his friend came calling him.

He said before he could come out, there was a police officer at the doorway.

“I was arrested and sent to the police station, where my statement was taken and l was handcuffed for three days in a police cell without access to a lawyer,” he said.

He said when they got to court, he was asked, whether, he knows the complainant, his friend and he said yes and was asked, if he took money from him, which he responded in the affirmative.

“He gave me money to register a football team for him.’

He claimed the court did not listen to his explanations and was convicted and sentenced to six years imprisonment.

Mr Agyemeng alleged that his mobile phone was seized during the process and this prevented him from calling his family members, friends and even his headmaster, who might have come to pay the fine.

He was full of praise for Mr Kwarteng when he was told of his release after serving 36 months in prison.

He expressed gratitude to the Good Samaritan, Mr Owusu, for supporting the NGO to pay for his release.

Mr Kwarteng, who is also the Ambassador Extraordinaire of Prisons, told the GNA that he met Pastor Gabriel, as he was affectionately called by inmates in Prison, during his usual visits as part of his NGO operations and during his programme “Time with the Prisoner” TV series.

He said information from the prison authorities suggested that Mr Agyemang demonstrated a sense of good behaviour while in prison.

He was the leader of the religious group in prison, an interpreter and a teacher, who taught the inmates Mathematics, English, ICT and some Ghanaian Languages.

He said Management paid the fine at the court registry where warrant was issued for his release.

He commended Mr Owusu for his support in rescuing Mr Agyemang from prison.

The Ambassador Extraordinaire of Prisons said it appears the laws of the country do not give listening ears to the poor and the voiceless in society. GNA