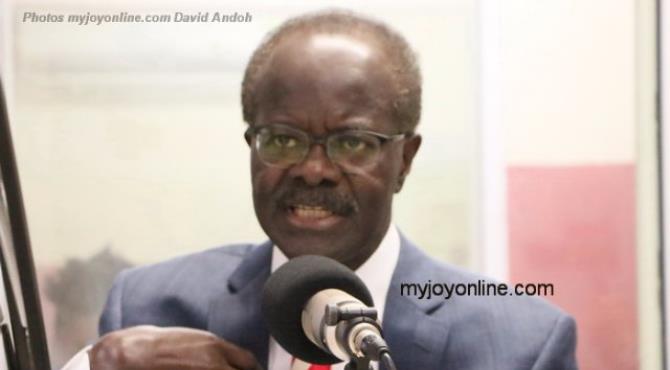 The Progressive People’s Party (PPP) Presidential Candidate has described the earlier disqualification of some 12 presidential candidates by the Electoral Commission (EC) as a needless exercise.

Dr Papa Kwesi Nduom has said the decision by the Commission which was overturned by Ghana’s apex court ended up wasting Ghanaians time.

“This is a matter that was not supposed to happen the way it did,” he said, expressing excitement that his decision to petition the High Court has paid off.

The economist made these comments during an interview with Raymond Acquah, host of Joy FM’s Top Story programme, Wednesday.

The EC on October 10 rejected the nominations of leaders of 12 political parties for not meeting Regulations 9 of the C.I.94, the law governing the 2016 election.

The affected parties among which include the PPP, National Democratic Party (NDP), All People’s Congress (APC) and People’s National Convention (PNC) among others went to the High Court to challenge the decision.

The PPP was the first to file the suit and the judge who presided over its suit quashed the decision of the Commission, ordering it to give the party the opportunity to make corrections on its nomination form.

In a surprising development, the Commission displeased by the decision of the lower court went to the Supreme Court (SC) to seek review of the ruling.

Sections of Ghanaians, many of whom had hailed the Commission for reducing the number of presidential candidates, wondered if the December 7 polls would come off considering the posture of the Commission.

Minority leader, Osei Kyei Mensah had told Joy News that he feared the election would be postponed as happened in Nigeria during the 2015 election when the polls were rescheduled to six weeks time.

EC boss, Charlotte Osei in an interview with BBC’s Akwasi Sarpong expressed confidence that the suits which had been brought against the Commission would not undermine the electoral calendar.

The whole drama had dragged on for close to a month since the nation was told of the presidential candidates who would not make it to the ballot.

But on Monday, the justices of the Supreme Court directed the EC to give an audience to the aggrieved presidential candidats and afford them an opportunity to correct their errors.

The Commission complied and on Wednesday announced that it would not accept the nomination of seven presidential candidates.

They include leaders of the Ghana Freedom Party (GFP), Independent People’s Party (IPP), All People’s Congress (APC), and the United Front Party (UFP).

The PPP leader, former First Lady Nana Konadu Agyemang Rawlings of the National Democratic Party (NDP), and Dr Edward Mahama of the People’s National Convention (PNC), who were earlier on disqualified joined the list of seven presidential candidates for the December polls.

Considering what has transpired in the country within the month as a result of the EC’s behavior, Dr Nduom said Ghanaians did not deserve what happened.

“We know we have a lot of work to do [because] we’ve lost some grounds but we’ve gain a bit of visibility and because of this we’ve gotten to know who our friends are,” he said.

He said the whole brouhaha would not have happened had the nation a “properly constituted voters’ register.”

“Too much has been made of that small matter,” he said, adding he was happy that the “legal right of not just Papa Kwesi Nduom, but Ghanaians facing state institutions have been respected.”

Dr Nduom said the PPP would be organise mega rallies in across the country starting from the Central Region to regain the party’s place in the election.

“We are on track to win the December 7,” he said with an air of confidence, adding, those who had hoped for his disqualification would see at the Flagstaff House.