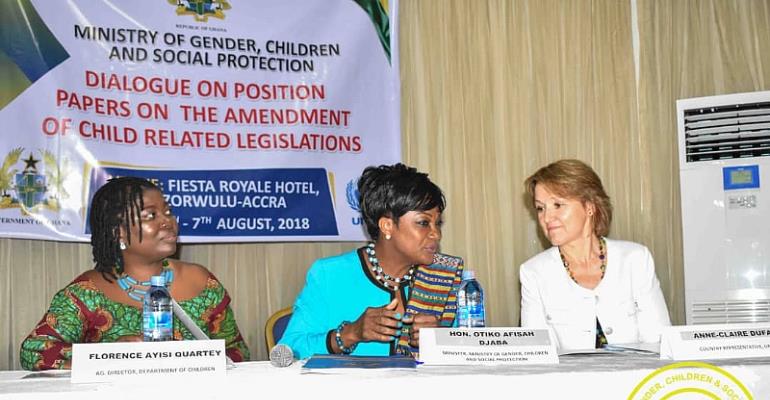 The Ministry of Gender, Children and Social Protection is leading a stakeholder discussion on the proposed increase of the age of consent to sex from 16 to 18 to uphold the reproductive justice of boys and girls.

What this supposed to mean is that whiles a 16-year-old boy is too young to marry, he is not too young to have sex. The sensibility of these aspects of the law has left a gap between these two child legislations.

The sector ministry says it is therefore prudent to increase the age of sexual consent to match the minimum age for marriage. It added that the goal of this exercise is to protect adolescents from abuse and from consequences they may not be fully aware of when engaging in sexual activity.

But the two sides of the argument is that, if a child is too young to marry before the age of 18, is he/she old enough to have sex at age 16? Or, considering that children are becoming sexually active early in their lives, is it prudent to keep the age of consent at 16 or even reduce it?

It also examines the issue of corporal punishment where physical pain is used as a form of discipline for boys and girls as well as safety against online contents.

The sector minister, Madam Otiko Afisa Djaba backed the call at the legislative and policy review dialogue which is being held with stakeholders by the Department of Children under the Ministry to propose changes to bring the existing laws in line with the Convention on the Rights of the Child.

She said in spite of all the progress, children continue to suffer violence on a daily basis.

Otiko Djaba noted that record indicates that about 21percent of girls marry before their 18th birthday and about 22percent of children aged 5-17 years are engaged in child labour.

According to her, the 2012 Ghana MICS results show that 94percent of children aged 2-14 years were subjected to some form of violent (physical and/or psychological) disciplinary methods.

The sector minister added that 14percent of children aged 2-14 years were subjected to severe physical punishment and 73 percent to minor punishment.

Madam Otiko Djaba noted that results also show that about 50 percent of respondents believed that a child needs to be physically punished to bring them up properly.

She opined that these statistics call for the need to strengthen our capacities to raise the necessary awareness and bring on board all stakeholders and partners to improve the wellbeing of our children.

According to her, the position paper on Age of Consent to Sex and Age of Marriage discusses the issue of sexual consent in Ghana taking into consideration the international framework and the national legal and policy framework concerning the issue.

She indicated that it also highlights the historical context of sexual consent, prevalence rate, causal factors and the interventions in Ghana so far. The paper also selects best practices for addressing the issue of sexual consent including making sexual and relationship education mandatory in and out of school.

The second position paper which focuses on corporal punishment, Madam Otiko Djaba said discusses the laws pertaining to the phenomenon in Ghana, the recommendations made by various Regional and United Nation Human Rights Bodies.

“It recommends for the amendment of such laws, calls for harnessing positive aspects of Ghanaian culture, which considers the child as gift to society, and discipline as an opportunity for learning, to provide a protective environment for children in various communities and prevent future occurrences of violence through corporal punishment,” she stated.

The Child Online position paper, the sector minister indicated is calling for close collaboration between all stakeholders to develop a framework that helps achieve some kind of consistency, share best practices and agree on what should be expected of service providers to protect their users from abusive behaviour and content online.

She emphasized that it recommends further actions in the area of a regulatory regime that supports digital service providers and delivers improve protection to users, combined with a sanction regime to ensure compliance.

The Acting Director for the Department of Children under the Ministry, Mrs. Florence Ayisi Quartey said the dialogue provides them the opportunity to further strengthen our legal framework for the protection of children in line with emerging issues.

She noted that Ghana has been accused of being quick to formulate laws and policies that stay on the shelves, lacking implementation.

Mrs. Quartey added that in 2015 and 2016 when the Child and Family Welfare and Justice for Children Policies were launched respectively, efforts have been made by Government, Development Partners, NGOs and Civil Society Organizations to ensure its full implementation.

She intimated that processes for the amendment of legislation began in 2017 with a mapping of existing laws and policies related to children.

According to her, the essence of the exercise was to give stakeholders a clear indication of areas within our existing legislation that are inconsistent with the two Policies and direction for review or amendment.

Mrs. Quartey said however, it became necessary for them to focus on the amendment of some key laws such the Children Act, and the Juvenile Justice Act to be consistent with the two new Policies.

She opined that regional and nation consultations have been held to solicit inputs from key stakeholders for the review process. A lot of issues have been agreed on to form the bases of the amendment.

The Acting Director of the Children Department noted that among them were protection of child victims and witnesses of crime, Determination of age of juvenile, Right to privacy and expungement of records, Remand of juvenile, Separation of juvenile and adult trials Mandatory appointment of legal aid lawyer for juvenile, Diversion the role of the community justice system in resolving minor fences, Reform of child panels etc.

However, three issues could not be agreed on necessitating the development of the three position papers we have here this morning.

The purpose of the two-day dialogue is to give stakeholders the opportunity to have their inputs captured on the matters of Age of Consent to Sex and Age of Marriage, Corporal Punishment and Child Online Safety.