Kremlin ready to talk Trump-Putin summit in D.C. this fall 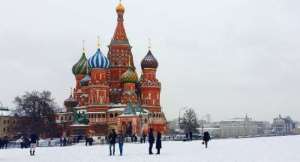 The invitation would mark Putin’s first visit to the United States since 2007, when he met with former President George W. Bush. Russian ambassador Anatoly Antonov said Friday Putin is ready to discuss the possible trip.

News of the invitation came just hours after Trump suggested on Twitter he was looking for another meeting with the Kremlin leader. His first summit in Finland Monday stirred controversy all week, due to the president’s comments on Russian interference in the 2016 U.S. election.

White House Press Secretary Sarah Sanders said the two agreed to continue a working-level dialogue after their meeting in Helsinki.

“President Trump asked [U.S. Ambassador to Russia John Bolton] to invite President Putin to Washington in the fall and those discussions are already underway,” she tweeted.

The White House’s announcement of an autumn visit came as a surprise to some, including Director of National Intelligence Dan Coats.

“Say that again,” he said when told by a reporter Thursday. “Okay. That’s going to be special.”

“I don’t know what happened,” Coats added, when asked about Putin’s meetings with Trump in Helsinki.

Antonov said Thursday arms control treaties and the Syrian conflict were among the topics discussed, including “specific and interesting proposals” by Putin on Syria.

Trump’s deferential treatment of Putin in Helsinki, and a one-on-one conversation between the two men without notes, a public summary or anyone but interpreters listening, has prompted debate about whether Putin could have incriminating evidence against Trump.