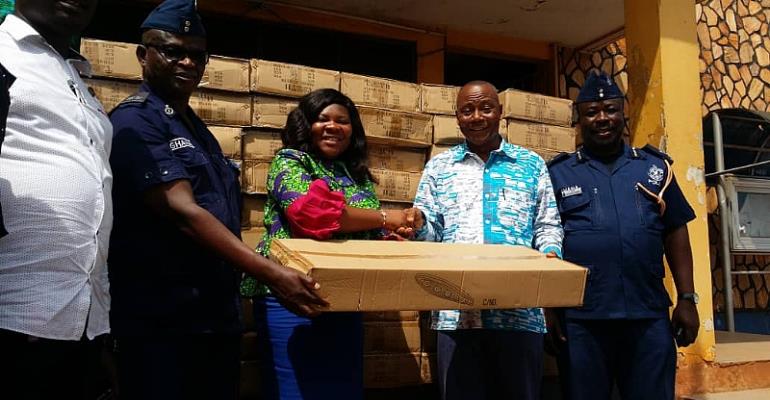 The Member of Parliament for Madina(MP) Constituency in the Greater Accra Region has presented one hundred streetlights worth several thousands of Ghana Cedis to the La-Nkwantanang Municipal Assembly to help beef up security in the municipality.

The MP, Alhaji Abubakar Saddique Boniface flanged by the Constituency executives of the New Patriotic Party (NPP) presented the streetlights to the Municipal Chief Executive (MCE) Jennifer Dede Afagbedzi and the Madina Divisional Police commander, Assistant Commissioner of Police (ACP) Afriyie Tachi at a colourful ceremony in the municipality.

The MP who is also the Minister of State at the Office of the Vice President in a remark was hopeful the lights will go a long way to assist the Assembly in beefing up security in the area.

He called on the Assembly to take steps to ensure the street lights are fixed at the newly constructed market for the women behind Oman FM, a popular radio station owned by the maverick NPP’s politician and Member of Parliament for Assin Central in the Central Region; Kennedy Adjapong near Ritz Junction area in the municipality.

He said his attention has been drawn to the distress of the women operating in the area since the Assembly relocated the hawkers from the Zongo-Junction area to that part of the area.

The Minister of State called for the need for the properties of the women operating in that area to be protected to sustain their market activities in the area.

He was hopeful the Assembly will as a matter of urgency fix some of the lights at the market to curb the complaints of insecurity and theft in the new market.

According to him, if the security of the area is beefed up more and more of the market women will move from the streets to the new market which will eventually lead to more revenue for the Assembly.

He stressed that ensuring security in the area will boost the confidence of the residents in the area in the run-up to the celebration of the Christmas festivities.

He pledged to support the Assembly in this direction to ensure residents have a peaceful yuletide this year.

‘Madina being one of the fastest growing business hubs in the country is too dark in the night leading to some miscreants taking advantage of the situation to commit crime.

This, has gone a long away in tarnishing the image of the municipality with some critics touting the area as unsafe during the night’ he posited.

He added that he will do everything possible to have some of the ‘red line’ areas in the municipality lighted ahead of the Christmas festivities.

He reminded the Assembly to jealously maintain the lights to prolong its life span for it to better serve the residents.

Receiving the items on behalf of the Assembly, the MCE expressed gratitude to the MP and assured the MP that the items will be used for the intent for which it was donated.

She said the items are inn timely, as the Assembly has been deliberating on how to beef -up security in the municipality ahead of the Christmas festivities.

She gave the assurance that the Assembly will ensure the items are evenly distributed and fixed in the particular areas of the municipality to save lives.