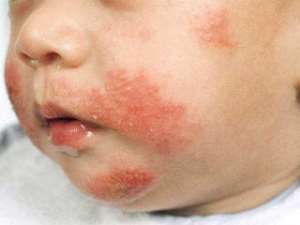 The classic test for human atopy is the scratch test, or intradermal injection of antigen, a test that has been used for over hundred years. The test reveals active cutaneous anaphylaxis and depends on the presence in the skin of sensitized mast cells that have surface-bound IgE.

Upon exposure to sensitizing antigen, these cells release much of their stored pharmacologic mediators of anaphylaxis, especially histamine. The latter mediator causes localized increases in capillary permeability, expressed as a wheel-and-flare reaction.

In man, passive cutaneous anaphylaxis can be demonstrated by injecting the presumed IgE-containing serum intradermally and later injecting the antigen into the same site. This test, which is named after Prausnitz and Kustner, requires innoculation of human sera into monkeys rather than humans, to avoid the danger of transferring hepatitis to the human volunteer recipients.

The time between the injection of sensitizing serum and the injection of antigen is critical; if it is too short, there is little or no response. Maximum response requires a latent period of at least one day. Human IgE causes responsiveness in the skin for many days to many weeks, both in humans and in monkeys.

Essentially the same test is routinely used in laboratory animals, except that antigen is usually injected intravenously along with a blue colloidal dye. The increased capillary permeability caused by the released histamine results in a bright blue lesion at the responding site.

The increased uniformity in response achieved by intravenous administration of the antigen permits a reasonably precise quantification of the amount of circulating antigen-specific IgE present in the serum of the donor animal.

The second class of reaginic antibodies has been recognized in several species of laboratory rodents. This is a subclass of IgG that is heat-stable in contrast to heat labile IgE. The IhG subfraction is present in serum in much larger amounts than IgE, but it is not firmly bound to mast cells in the tissue.

Thus, to measure this antibody, the animal must be challenged with antigen one to six hours after injection of the antibody. Antibodies of this class compete with IgE for binding sites of tissue mast cells but are eventually displaced because of their loose attachment.

Presumably, this explains the necessary one-day lag period before a full response to IgE can be elicited in the passive cutaneous anaphylaxis reaction. As yet, there is no definitive proof for the existence of a counterpart of this second class of reagins in man.

However, a number of reports suggest that, under certain specialized circumstances, heat-stable reagins may also exist in man and may be important in the etiology of certain immunologic disorders.

There have been several recent suggestions that asthma caused by these heat-stable IgG antibodies cannot be relieved by disodium cromoglycate. In vivo tests for reaginic antibody are all relatively cumbersome procedures. For this reason, various in vitro methods have been devised to study the anaphylactic reaction.