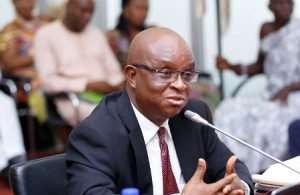 But for the benevolence of the Volta Regional Minister, a pregnant teenager, Rose Shabi, would have delivered her child in the Ho Female Prisons.

Rose Ashabi is currently serving a six-month prison term for her inability to pay a fine of GHc1,500.

The 18-year-old was convicted sometime in May 2018 by a Magistrate Court for pouring pepper on her cousin’s face during a quarrel, and sentenced to a fine of GHc1, 500 or 6 months in Prison in default of the fine.

Rose Shabi, unable to pay the fine was sentenced to six months and has since served 2 and half months of her sentence.

She recently appealed to the President, Nana Akufo-Addo for clemency for the sake of the unborn child, as the prisons did not have child-friendly facilities.

The Volta Regional Minister, Dr. Achibald Letsa after the intervention said he decided to help because he was quite sad when he read about the plight of the lady in the newspapers.

“After reading the story, I was quite sad. This was not brought to our attention earlier. So this morning I organized myself and dashed to the female prison and made available the amount involved which is GHc1, 500 to the officer in charge of the prison to pay the fine at the court so that this young lady can have her freedom,” Mr. Letsa added.

Although the necessary processes would have to be initiated despite the payment, Mr. Letsa said he believes the lady would be released by Tuesday, July 24, 2018.

“There are processes to go through – prison officers would have to go to court to pay the fine and do the necessary paper works for her to be set free. We will do whatever we can to make sure that the processes are fast-tracked for her to be released by tomorrow [Tuesday].”

Although the 43 prisons in the country are to hold a total of 9,875 prisoners, they are holding over 13,000 prisoners.