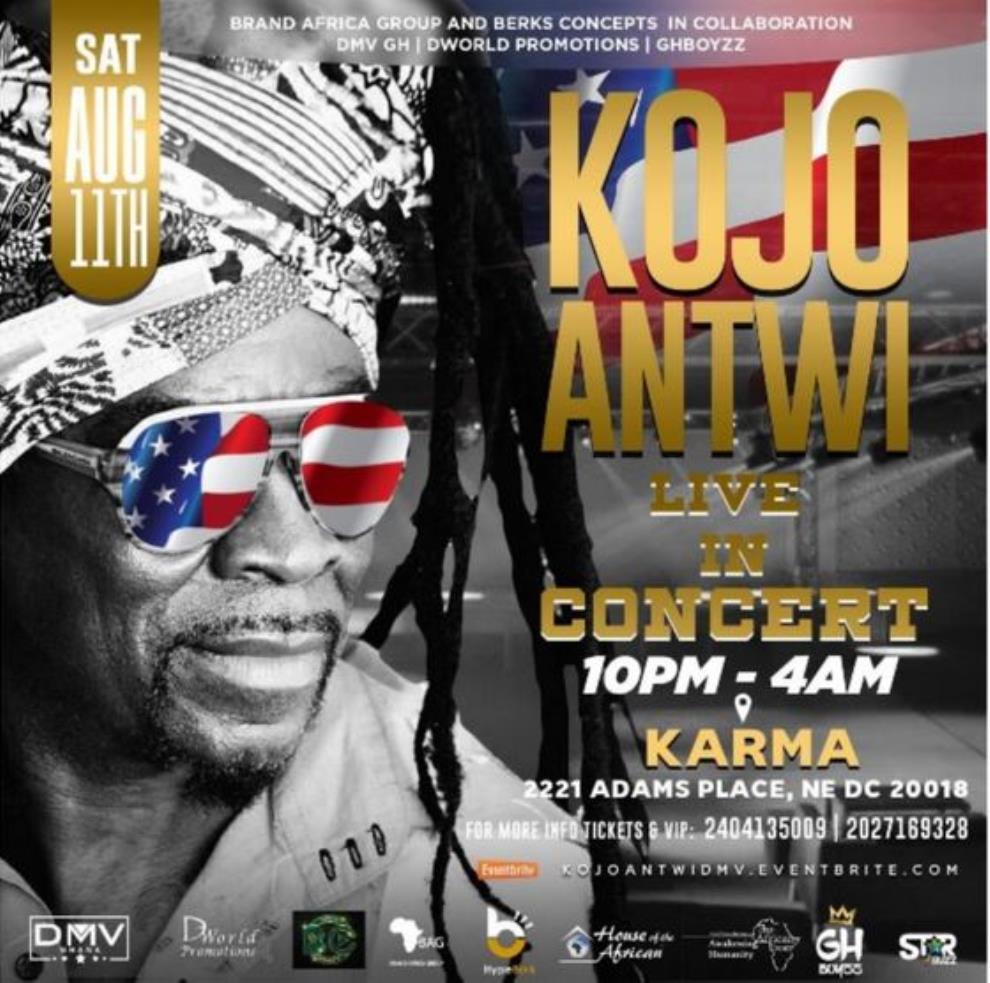 Music Legend Kojo Antwi To Rock Audience In US August 11 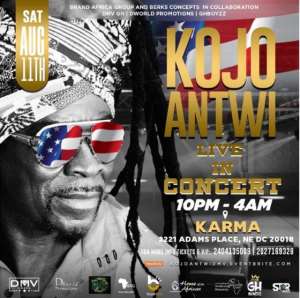 Whether you call him ‘Ghana’s favorite musician‘ or ‘Mr. Music Man‘ or ‘The Maestro‘, you are still going to love the legendary Kojo Antwi for his United States (US) lyrical invasion. His US-tour is about to hit the American Capitol at concert venue Karma, located on 2221 Adams Place in Northeast of Washington, DC.

Come August 11, 2018, Kojo Antwi will entertain fans in the US Capitol in a concert put together by Brand Africa Group and Berks Concepts in collaboration with DMV Ghana, DWorld Promotions, and GH Boyzz Promotions.

Chief Executive Officer (CEO) of Berks Concept Charles Owusu Berko, told TheAfricanDream.net that “‘Mr. Music Man’ opened his US-tour with a massive convert on the sidelines of GhanaFest in Chicago, Illinois, at South Cottage Grove. It was well attended by almost a thousand fans. We are now working on his second gig in Washington, DC, and invite lovers of Ghanaian and African music to attend.“

“He did almost all of his hits on stage in Chicago, the fans loved him and I ask that you catch him in DC or a city near you because from the Capitol he is headed to New York to perform at the New Life Academy Auditorium in Mouth Vernon come August 17th.”

“Two weeks afterward we will be taking over Massachusetts with a show at the Armenia Cultural Center in Worcester,” concluded the Berks Concept CEO who plans to have the musician pay a courtesy call on the Embassy of Ghana while in DC.

Click here to read more about other Ghanaian musicians .

According to Ama Nsroma Larbi of House of The African, a Ghana-based media partner for the event, this US tour of Kojo has been a long time coming. “We are happy Kojo Antwi gets to do this again State-side because the last time was back in 2012,” she added.

Information from Julian Asiedu of Jagonzy TV indicated that tickets for the DC event which starts at 10PM are available online at www.kojoantwidmv.eventbrite.com , also watch that space for more info about upcoming venues during the 2018 tour.

Kojo who is also a keyboardist and bass guitarist released his first album titled ‘All I Need is You‘ in 1986.

Visit KojoAntwi.net to find out more about the multi-award-winning musician who has released over a dozen critically-acclaimed albums that cut across genres like Highlife, Afropop, R&B, and Reggae.