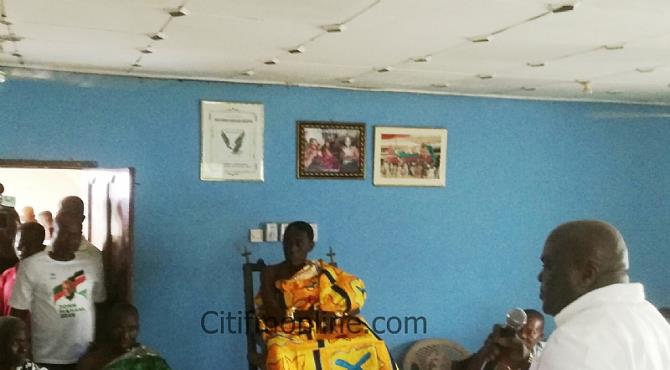 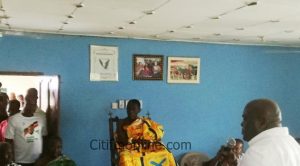 Okogyeman Ankomah Basapon, the Suhyenhene and Mponuahene of the New Juaben Traditional Council has endorsed the flagbearer of the National Democratic Congress (NDC), John Mahama for a second term in office.

The Chief made the endorsement when the Chief of Staff, Julius Debrah and his entourage paid a courtesy call on him in the Eastern Region as part of his campaign tour of the region.

According to him, president Mahama has performed impressively in his first term of office and therefore deserves to be given another term to serve. “I am marveled at what Mahama has accomplished in his first four years in office He has managed our taxes well with a lot developmental projects so he deserves another four years, same as was given to former president Agyekum Kufour,” he said.

He added that “I remember vividly the former president John Kufour said that no president can change the country given only four years in power but eight years will be enough for every president, so president Mahama also deserves eight years to be properly assessed”

He also endorsed the candidature of Haruna Appau, the NDC parliamentary candidate for then ew Juaben North constituency. He said “we have all seen what Haruna Appau has been doing for the people of Suhyen even though he is yet to be voted as the Member of Parliament. He came to our aid when there was shortage of water some months ago. He also helped the people of Jumapo with street lights and other developmental projects so Haruna is one of our own and we will push him to parliament,” he said.

Okogyeman Ankomah Basapon said his declaration of support for the candidate must not be seen as participating actively in partisan politics but as speaking the truth and given credit for good works done.

“I am not engaging in politics but only speaking the truth. Developmental projects done by the president are there for everyone to see. This election is about the one who is available all the time, one who has been tested and knows the plight of his people so Mahama and Haruna Apau should be given the nod.”

He urged residents to go out in their numbers to vote massively for both President Mahama and Haruna Appau because that was the only by which they can be guaranteed that their needs will be met.

The Chief of Staff, Julius Debrah expressed his gratitude to the Chief and commended him for his boldness and confession in declaring his support for President Mahama.

He further assured him of government’s continuous support to the people of Suhyen.