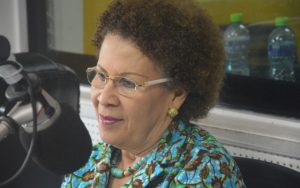 Wife of the flag-bearer of the Progressive People’s Party (PPP), Mrs. Yvonne Nduom, has assured Ghanaian women that when the party is elected into office in the December 7 polls, it will set up a special fund to assist women entrepreneurs, traders and market women.

She hinted that the fund will be managed by the party’s vice presidential candidate, Ms. Brigitte Dzogbenuku, who is a celebrated entrepreneur and women development advocate.

Mrs. Nduom, who was addressing a mammoth rally in Komenda in the Komenda-Edina Eguafo-Abirem (KEEA) constituency in the Central Region on Sunday, December 4, 2016 said the PPP understands the frustrations men go through in Ghana today in their bid to fend for their families, hence the party’s decision to assist women with some capital in their respective areas to be able to assist their men.

According to her, Ms. Dzogbenuku was selected by her husband, particularly for
her role in women development agenda.

“A PPP government will empower women to be able to support their homes and also to be independent. Our men are suffering but unfortunately, we can’t help them because we do not have the financial muscle to help them. That will change under Dr. Papa Kwesi Nduom’s government,” she stressed.

On education, Mrs. Nduom urged parents to vote for the PPP for a better educational life for their wards, adding that the PPP will insist that every child goes to school from crèche to senior high school for free so they can be absorbed into the huge factories that Dr. Nduom will build when he becomes President.

For his part, the party’s parliamentary candidate for the area, John Sterlin, thanked the people for their unflinching support over the past few months and urged them not be persuaded by the things being shared by the ruling National Democratic Congress (NDC).

Mr. Sterlin assured them of adequate representation and employment opportunities when he is elected Member of Parliament (MP).