More than 1,000 people had gathered at 6 a.m. in a nearby parking lot to watch the planned implosion at the plant owned by Pacific Gas and Electric in Bakersfield. After structures on the property came crashing down, a police officer at the scene heard a man screaming for help and saw his leg had been severed, police said.

“It was a piece of shrapnel that came flying out of the explosion and came across and went through a couple of chain link fences, struck him and impacted into a vehicle,” said Lt. Scott Tunnicliffe.

The 44-year-old victim might lose his other leg as well due to his injuries, Tunnicliffe said.

Four other spectators were treated for minor injuries, said Kern County Fire engineer Leland Davis. All of the injured spectators were standing beyond a perimeter set up to ensure public safety, Davis said. 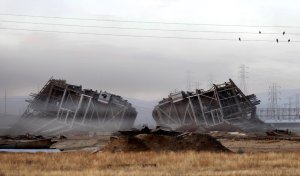 Residents of the city about 100 miles northwest of Los Angeles were eager to see the old plant torn down to make way for new development. The plant was decommissioned in 1986 and has been idle ever since.

Pacific Gas and Electric reached an agreement with the city to clean up the property and prepare it for sale. The company hired subcontractors to handle the demolition of the plant’s boiler structures and worked with local authorities to set up a safe perimeter 1,000 feet from the site, said Denny Boyles, a company spokesman.

“We are deeply saddened that this happened,” Boyles said. “We’re looking for answers like everyone else.”

The incident was first reported by the Bakersfield Californian.