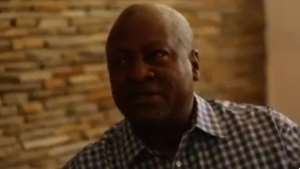 The former president, John Dramani Mahama has watched excerpts of the yet to be premiered football documentary by investigative journalist Anas Aremeyaw Anas and has been left in complete shock.

The documentary titled #Number 12 which is set to be premiered on June 6, 2018 captures President of the Ghana Football Association (GFA) Kwesi Nyantakyi engaged in alleged corrupt activities.

Former President Mahama like the very few who have had the opportunity to watch exclusive excerpts of the video was visibly shaken by the revelation.

In the video posted on Anas’ Facebook page, Mr Mahama said the revelations may be the reason Ghana in recent years has struggled to remain relevant in football.

“For many years we have been wondering why the quality of our game keeps going down…Ghana was one of the greatest teams on the continent and internationally.

The #Number 12 documentary will premier at the Accra International Conference Center from June 6-7, 2018, with four screenings each day: 3pm, 5pm, 8pm & 10pm.

The video will also be shown at the new GCB Auditorium at the Kwame Nkrumah University of Science and Technology (KNUST) in Kumasi on June 9 and 10, 2018.

The people of Tamale will have their turn to watch the video at Radach Hotel on June 13, 2018, while those in Takoradi will have the opportunity at Akroma Plaza on June 16, 2018.