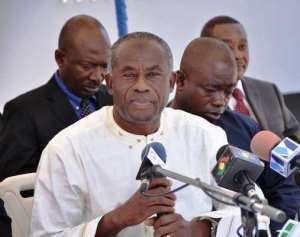 The Member of Parliament (MP) for Asutifi South District of Brong-Ahafo Region has won the hearts of chiefs and traditional authorities in the area following the massive development being witnessed in the area.

The traditional authorities have thus expressed appreciation to the MP for his efforts at enhancing the development of the area.

They showered praises on Alhaji Collins Dauda, the legislator for his true sense of statesmanship that had impacted significantly on the development of the communities.

For the sake of development, the chiefs affirmed their commitment to push and make the proposed creation of the Ahafo Region a reality.

The traditional rulers gave the commendation when they interacted with the lawmaker at Mehame, a farming community in the District as the campaign for the creation of the new Ahafo Region gathers momentum in the area.

According to the traditional rulers, the people in the area would forever be grateful to Alhaji Dauda for better and improved road networks, extension of electricity to emerging settlements, and deprived communities as well as access to potable drinking water.

This notwithstanding, Nana Osono Pantu, the Chief of Mehame expressed the hope that the MP would take the lead and help intensify public sensitisation for eligible voters in the area to participate in the impending referendum that would decide the creation of the new region.

The chief said many hard to reach communities in the area were still lagging behind in development as it was deprived of basic developmental needs, hence the need for a new Ahafo region to help broaden the scope of development and alleviate the plight of the rural dwellers as well .

Nana Danso Agyei Ababio, the Chief of Nkaseim, reminded the traditional rulers on the need for them to mobilise their people to participate in the referendum set for December 27, this year.

He said the Ahafo area would not be developed as expected if the new Ahafo region was not created, consequently the need for the people to bury their political differences and canvass for more votes.

Alhaji Dauda assured the chiefs that with peace and tranquility, development would thrive and urged them to jealously protect the prevailing peace in the area.

He assured the people of his commitment to facilitate equitable distribution of physical developmental projects in the communities and challenged them to initiate self-help project to win the support of development partners.

The MP said the focus of every government was to push forward development, hence the need for the people to bury their political differences and offer support to speed up development in the District.

Meanwhile, the traditional authorities have implored both supporters of the National Democratic Congress (NDC) and the New Patriotic Party (NPP) to forget the past differences and forge ahead in unity for the development of the District.

They reminded followers of the two parties that intermarriages had brought the people under one family – they must not allow partisan politics to cause divisions and create enmity among them.

The chiefs and queens underscored the need for the two parties in the area to come together, identify certain misunderstandings and alleged violent attacks that erupted between them for amicable settlement.

Most of the chiefs who spoke said they were unhappy that one Mr Abdulai Naaba, a younger brother of the MP, based on his alleged statements has been deemed a fugitive.

The chiefs said they strongly condemned the comments of the NDC activist, but they added that ‘we can attest that Mr Naaba is a humble and well-respected man who has no history of bad record’.

Nana Panto singled out Mrs Cecilia Amoah, a former MP and the 2016 NPP parliamentary candidate for the area, to forgive and bury whatever she has against Mr Naaba and other supporters of the NDC in the area.

This, he said, would pave the way for unity to prevail between the NDC and the NPP so as to enable the people to intensify education and campaign for the referendum for the creation of the Ahafo Region.