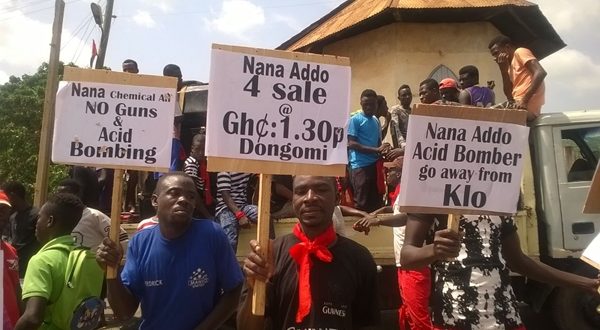 Atta-Akyea must apologise to us – Krobo residents to Akufo-Addo 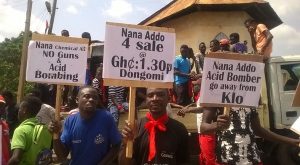 Some Residents of Krobo Odumase in the Eastern Region have demanded that the New Patriotic Party (NPP) Flagbearer, Nana Akufo-Addo, compel the NPP MP for Abuakwa South, Samuel Atta-Akyea, to apologise to them for comments deemed offensive to Krobo land.

Mr. Atta-Akyea is reported to made some derogatory remarks on government’s plans to build the Eastern Region University in the area.

This led to the scores of residents marching in protest to demand an apology from the Abuakwa South MP today [Tuesday] in the Lower Manya Krobo district.

According to the protesters, Mr. Atta-Akyea on the floor of Parliament kicked against the establishment of the university and called on Nana Akufo-Addo, who is visiting the area to call him to order.

A spokesperson of the demonstrators, Evans Tetteh, recalled Mr. Atta-Akyea’s comments saying, “Krobo land does not deserve a university and if a university is supposed to be built, it is supposed to build in Akyem land. This statement did not go down well with us as a group.”

“This demonstration is a peaceful march trying to prompt the tradition council of the said statement made by Atta-Akyea and we are calling on the traditional council that when Nana Akufo-Addo pays a courtesy call on our paramount, they should draw his attention to the statement made by honorable Atta-Akyea and the need for him to apologise to this group and Krobo and in general.”

“So if Atta-Akyea fails to apologise, if Nana Akufo-Addo fails to do the right thing, we will meet as a group and we will decide the way forward,” Mr. Tetteh stated.