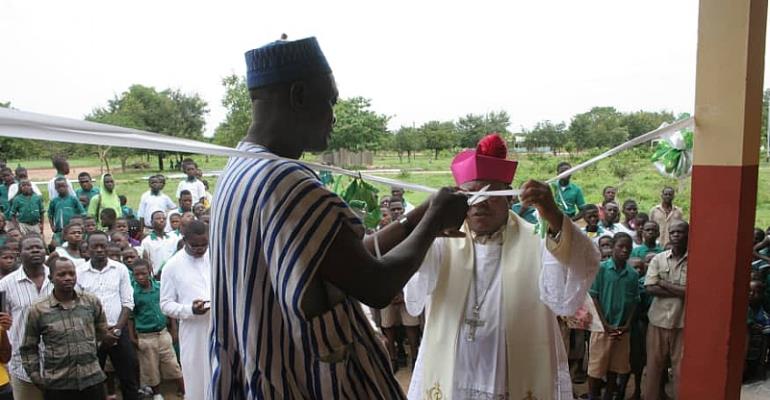 The Bishop of the Diocese of Damongo and chairman of Ghana Prisons Council, Most Rev.Peter Paul Angkyier has handed over a three unit kindergarten block, an office complex and a staff common room to St.Peters’ cluster of schools in Lingbensi in the North Gonja District of Northern Region of Ghana.

Constructed with full funding(Ghc130,000) from the Cross Catholic in Kenya,the facility is expected to lighten the massive infrastructural gap the school was currently bedevilled with.

Speaking at the handing over ceremony,the Bishop emphasized that,catholic education has been part and parcel of the missionary work in Northern Ghana since its inception,because education is about human promotion, adding that,illiteracy which leads to poverty and misery are obstacles to life.

Catholic education according to him is based on the mandate of Christ and focuses on the human person who is related to other people and that is why intercultural and interreligious dialogue are some of the special qualities of Catholic education.

He further stated that,in the context of Catholic education,it is not just about passing exams but character formation,thus,developing the human person Intellectually,emotionally,socially,spiritually inter alia.

“In the context of Catholic Education,we are not looking at only passing exams.I think recently,the government mentioned that they want to reform education by moving from the stage where you only pass exams to building character.This is basically what Catholic education is all about;developing the human person Intellectually,from the emotionally,socially,spiritually,culturally,religiously…,”he said.

He called on the teachers to espoused the principles of commitment,dedication,discipline, sacrifice and hardwork; and make their relationship with pupils formative and transformative for the school to grow and develop.

Whilst admonishing the school to preserve the environment and plant trees,he applauded the District assembly,GES office,the chiefs and opinion leaders for the diverse support they have been rendering to the school.

The Guidance and Counseling Coordinator of the District and the acting headmaster of Wasipe S.H.S.,Isaac Nyame acting on behalf of the DCE pledged the continuous support of the assembly towards the needs of the school.

Dr.Rev.Clement Aapegnua who represented the Cross Catholic related in brief how the project came about,and that if there was any thank you , it is to the Bishop,because he first ‘cried that there was a need here’.He disclosed that anytime the Bishop comes around on pastoral visit, he listens to the challenges,needs and difficulties of the people and try to find ways he can help. So it was during one of those advocacy,a group called Cross Catholic heard of the need of the Diocese and expressed interest in helping in the area of education.The Bishop directed that they should be sent first to Lingbesi, and that was how the project was realised.

The head teacher of the School, Alori Wer Daniel bemoaned the inadequate furniture in the school with about three to five pupils sharing one mono desk or at worst checking the floor.He disclosed that the facility came at the right time, since at present the school was currently occupying two classrooms of the S.H.S., and have to vacate the premises next academic year.

The total enrolment of the school according to him currently stands at 469 pupils,consisting of 225 boys and 244 girls.KG1 and KG2 and all other classes have enrollment of more than 60 pupils, and that even though, the school has enough teachers for double stream,they lacked facilities.

Whilst thanking the Cross Catholic for the kind gesture, he called on the assembly and other groups to come to the aid of the school.