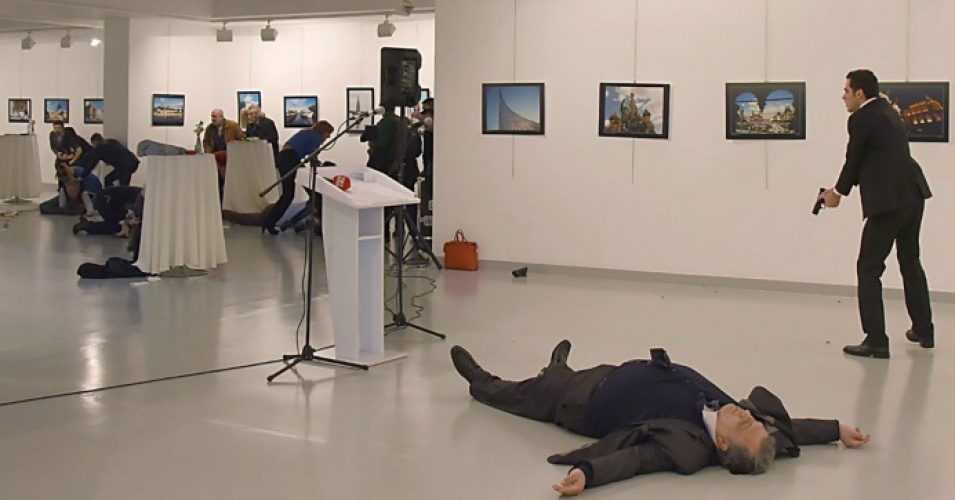 “And Ehud put forth his left hand, and took the sword from his right thigh, and thrust it into his belly.” Judges 3:21 (The Israel Bible™)

Russian media has announced that Andrey Karlov, the Russian Ambassador to Turkey, was shot and killed by an assailant. Several witnesses claim the gunman shouted, “Allahu Akhbar” (God is great, in Arabic) before firing at least eight shots. Three other people were reportedly shot in the attack. 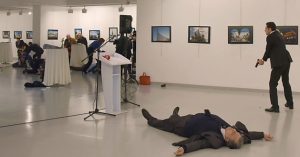 There are also reports that the gunman yelled,””We die in Aleppo, you die here” and “don’t forget Aleppo, Syria”. Aleppo is the besieged city in Syria presently undergoing a human-rights crisis. Though Russia and Turkey are on opposing sides of the conflict in Syria, they have been cooperating in efforts to evacuate civilians and alleviate the crisis.

Karlov was giving a speech at the Cagdas Sanat Merkezi modern arts center in the capital, Ankara, when the assailant attacked, shooting the ambassador multiple times in the back. CNN Turk reported the assailant had entered the event with a police ID

Turkey’s state-owned Anadolu Agency said the attacker was killed by the security forces after a gun fight.

US State Department spokesman John Kirby says that “we condemn this act of violence, whatever its source. Our thoughts and prayers are with him and his family.”

Relations between Russia and Turkey have been on edge since November 12015 when Turkey shot down a Russian bomber that had strayed into Turkish airspace while operating over Syria. Two Russian servicemen were killed in the incident, which led to sever Russian economic sanctions against Turkey. Turkey is a NATO member and US ally in the coalition fighting the Islamic State (ISIS), supporting rebel groups fighting a civil war against Syrian President Bashar al-Assad. Russia has a large military presence in Syria supporting Assad.