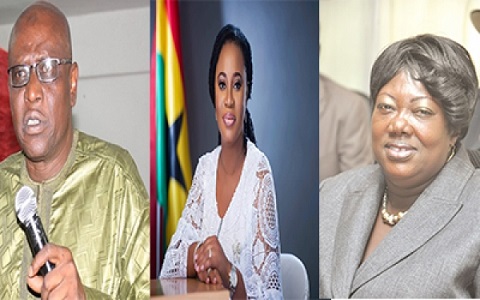 Charlotte Osei is a liar – Deputy Commissioners fight back 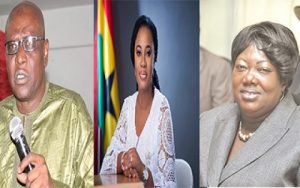 The two Deputy Commissioners of the Electoral Commission (EC) have described as palpable false, allegations levelled against them by the Commissioner.

The Deputy Chairperson in charge of Operations, Alhaji Amadu Sulley, says he is seeking legal advice over the corruption allegations made against him by the chair of the commission.

“I want to assure you that it’s not true. I have all the documents and I am going for legal advice,” Alhaji Sulley said in a text message to the media.

But in a written response by Ms Georgina Opoku Amankwah, who performs dual role of Deputy Commissioner in charge of Corporate Services as well as Finance and Administration, denied all the accusations levelled against her.

According to her, the amount was the expenses for 50,000 polling stations that the EC initially planned to operate.

Again, she said, the budget was also based on the assumption that voter’s registration would be carried on electoral area basis.

However, she said the Commission later adopted a merged electoral area registration system which reduced the cost of registration but resulted in challenges during the registration exercise.

Ms Amankwah noted that when the budget was presented to parliament, the Special Budget Committee with Ministry of Finance requested a meeting with EC to scale down the budget.

At the end, the EC, the Special Budget Committee and the Ministry of Finance agreed on 30,000 polling stations which automatically reduced the budget variables by about 40%.

“Therefore, the claim by the Chairperson that she reduced the budget to GH¢1.2billion is an attempt to glorify herself with an undeserved gratification,” she added.

According to her, a different panel made up of directors and experts, where necessary, evaluate the tenders for review by the Entity Review Committee which was chaired by the Chairperson of the Commission.

She noted that after the Entity Review Committee approved the evaluation report, the chairperson of the Entity Tender Committee signs the contract.

According to her, $41m STL contract went through the process and was even presented to the Commission for approval at the instance of Dr Kwadwo Afari , who felt that since he was about to retire, he would want the whole Commission to look at it.

Ms Amankwah stated that but for the exigencies of the time, Dr Afari Gyan had even wanted his successor to deal with it.
She said the Commission unanimously approved it to be signed urgently given the time constraints.

“It is, therefore, strange for the Chairperson alleged that I signed those contracts without the knowledge of the Commission, particularly when she requested for minutes of such meeting and was furnished with same,” she said.
According to her, Mrs Osei unilaterally abrogated the contract without recourse to the Commission that approved it.

Touching on the contracts worth over Ghc39 million, which she was said to have signed without the knowledge and authorisation of the chairperson between July and August 2015, Ms Amankwa said the contracts under reference had already been approved by the Entity Tender Committee (ETC) of which she was chairman.

She said, “as a matter of principle and convention, the Chair of the Commission’s Entity Tender Committee (ETC) signs award of contract letters….These contracts had been evaluated, reviewed and approved before the Chairperson of the ETC is given mandate to sign,” she stressed.

The EC Deputy chair further explained that the said contracts were in respect of procurement of election materials for the District Assembly elections and she was, therefore, in an official capacity to sign those contracts.

She also emphasised that subsequent to Charlotte Osei’s assumption of duty as chairman of the ETC, she (Ms Amankwa) ceased to sign contracts.

She, however, stated that given the fact that the EC Chairperson “recluses herself from office without informing her deputies she had had to sign contracts in her continuing absence to ensure that the 2016 General Elections were not in jeopardy”.

Describing the allegation as “frivolous, unmeritorious and borne out of bad faith”, Ms Amankwa stressed that “the Chairperson must understand that the Commission is not built around her,” adding that “her insatiable quest to seek exclusive jurisdiction over the administration of the Commission defeats the logic of contemporary corporate practice.

“Election is time-bound and action-packed and, therefore, failure to sign contracts timeously has the potential of putting the election calendar at peril,” Ms Amankwa emphasised.

In her response to allegations that some GH¢480,000 went missing from Staff Endowment Fund under her watch, she said explained that towards the retirement of the former Chairman of the Commission, it came to attention of the Commission that the said money had been used for operational purposes by the then Director of Finance (who had retired by then).

According to her, the issue then was for the Commission to establish whether or not such monies were used for operational purposes as alleged and whether or not it was authorised.

She stated further that this process was ongoing when the chairperson, Ms Charlotte Osei, assumed office.

“Upon averting her knowledge to it, an impression was created by her [Ms Charlotte Osei] to the effect that her two deputies might have had some under dealings in it. This impression might have been borne out of a reply to the letter written by her to the retired officer involved”

According to her, the reply from the former director claimed that his bosses (she and another deputy) were aware of the lack of money to run the office at some point in time.

She claimed that Ms Charlotte Osei unilaterally instituted audit investigations into the issue without the knowledge of her two deputies of which the final report was landed at EOCO.

She noted that sometime this year, the leadership of the Senior Staff Association (SSA) and the union met the EC Chairperson on the matter but she remained evasive on the matter.

“She had always evaded meeting the Union in the presence of her deputies for reasons best known to her,” she claimed.

Subsequently, she claimed that she, together with her other deputy, initiated moves to cause an audit into the activities the GHC480,000 was used for as claimed by the former Director of Finance.

She said it was at this point that she and her colleague deputy were first informed about an earlier audit investigation by the Chairperson of which copies of the draft report were made available to them.

“We looked at the draft report and saw that it did not completely deal with the issues involved and so I called Internal Auditor (I.A) into the meeting. Upon enquiry as to why his report was not answering the issues, he indicated that he did his investigation as per the terms of reference given him by the Chairperson.

“He also informed the meeting that he could have done further checks if he had seen the payment Vouchers (PVs) and other documents. He indicated that efforts to get the PVs and other documents from the Chief Accountant (C.A) proved futile as he [the C.A] told him that such documents has gone into archives.

I invited the C.A to the meeting and upon enquiry he said such documents could be made available to the I.A,” she noted.

She explained further that upon receipt of some documentation, the Internal Auditor met she and her other deputy with a finding to the effect that the money in question was used for operational purposes.

“However, the former Director of Finance did so without seeking my approval,” she explained.

She added that at a meeting on 4th May, 2017, chaired by the Mrs Charlotte Osei, she informed the Commission of the new development and a decision was arrived that the I.A finalised the report and made it available to the Commission for decision-making.

“The I.A. had become functus officio by then as he had resigned,” she stated.
Leave allegation apologetic
On the allegation that the Deputy Chair Operations approved her leave without recourse to the Chairperson, Ms Amankwah described it as “apologetic” because the EC boss was well in the knowledge of it.

She added that the allegation only goes to define how desperate and malicious the Chairperson is, adding that “the allegation is, therefore, not only pathetic but also begs the question”.

Ms Amankwah further said “because of the Chairperson’s arrogant inclination of not being accountable to anybody” on 20th June, 2017, she only wrote to notify the Commission that she was proceeding on leave without discussing with any of the deputies about how to run the affairs of the Commission in her absence.