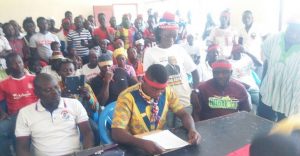 A group calling itself Concerned Activists of the New Patriotic Party in the Chiana-Paga constituency in the Upper East Region have urged the National Executive Committee and Appointing authorities of the party to rescind their decision in the appointment of three constituency executives into critical positions.

At a press conference on Monday in Mirigu, spokesperson for the group Daniel Namoo said, the three, did not campaign for the party in the 2016 general election.

The group also accused the three of campaigning openly against the then parliamentary candidate Clement Dandori.

“We have evidence that the three executives were lured with financial and other rewards by the then ruling NDC to campaign against the NPP which they succumbed to.

The three officers have a record of financial mismanagement and as such cannot be trusted with the handling of the finances of the three strategic offices”.

“We are vehemently against the appointment of the three party executives for government office. We, therefore, urge the National Executive Committee of our party and the appointing authorities to as a matter of urgency, rescind any decision to consider these officers for these critical positions” Mr. Namoo stated.

The group urged the party to consider other equally qualified applicants who have submitted their credentials for the same roles.

“We believe that any other persons aside from the three, when appointed will use their offices to support build the grassroots of the party in the constituency”.