BREAKING NEWS
GMT+2 03:07
Home Politics Corruption Tag: We Will Not Hang People Because Of Your Screams – NPP To NDC

Corruption Tag: We Will Not Hang People Because Of Your Screams – NPP To NDC 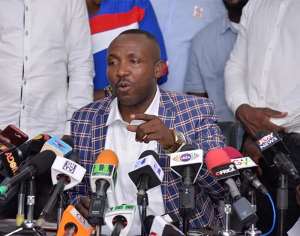 The New Patriotic Party (NPP), has stated emphatically that no amount of noise the opposition National Democratic Congress (NDC) will scream will compel them to abandon due process to deal with cases of alleged corruption involving government appointees.

In a press statement held at the party’s headquarters on September 11, 2019, the General Secretary stated that “…everybody deserves his or her day in court on any accusation…”

Mr. John Boadi added that the president will continue to refer cases of alleged corruption involving previous and current government appointees to the relevant agencies to determine their outcome in respect of the rule of law.

“…the NPP will support the president…” in the fight against alleged cases of corruption through “…impartial judicial proceedings…,” he emphasised.

The reaction of the NPP was in relation to a recently held press conference by the opposition NDC which sought to implicate the Akufo Addo government with a number of scandals involving some of his appointees.