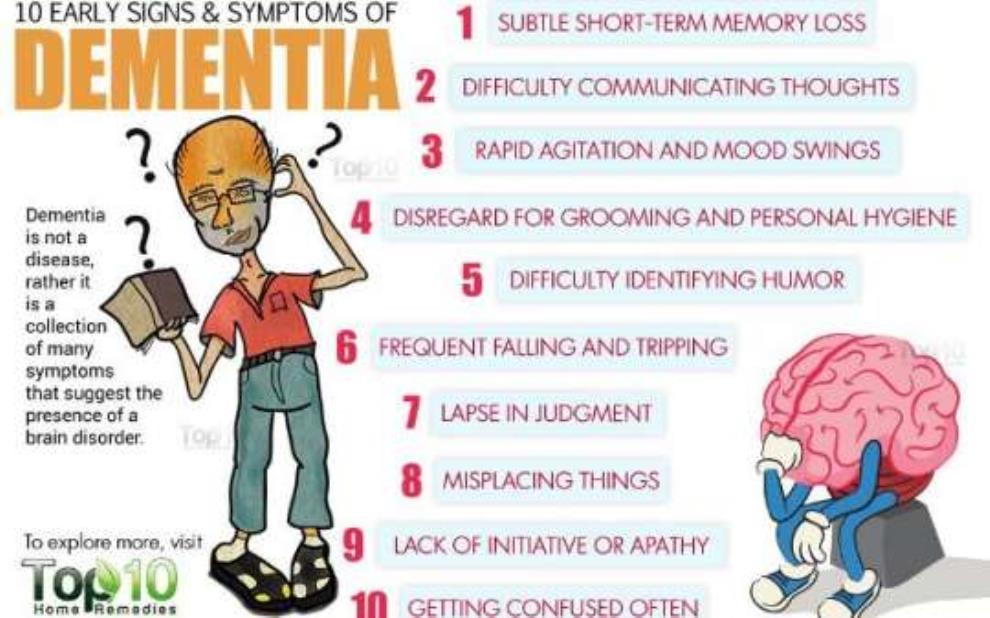 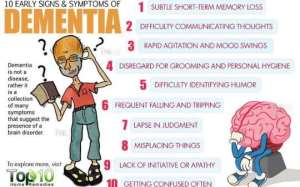 Over 10,000 Ghanaians who are suffering from dementia, a chronic disorder of the mental process, have been advised to seek medical help and an actual diagnosis of the condition.

Dementia is a disease that distresses the ability of the affected persons to understand what is happening around them and causes them to be frustrated as they perform their everyday activities.

Mr Benson Owusu, a Senior Staff Nurse at the Greater Accra Regional Hospital (Ridge) in an interview with the Ghana News Agency, said dementia affects each person in a different way, depending on the impact of the disease and the person’s personality before becoming ill.

He said when an individual exhibits signs and symptoms such as forgetfulness, losing track of time and becoming lost in familiar places; it must not be overlooked, because it could be the onset of the disease.

‘As dementia progresses to the middle stage, the signs and symptoms becomes clearer and more restricting, these include becoming lost at their own homes, becoming forgetful of recent events and people’s names, having increasing difficulty with communication, needing help with personal care as well as experiencing behaviour changes, including wandering and repeated questioning’, he said.

Mr Owusu said a good understanding of the condition would help many to understand why someone especially the aged behave the way they do and also enable relatives to seek early and expert management from the hospital.

‘To do this, let us identify elderly people who are our relatives or live within our communities; and easily forgets and say they have not eaten though even though their hands may be in a plate eating; or anyone who easily forgets his or her way home. When we see how we relate to such individuals, then we will gain understanding to this chronic illness’.

He said while there was no cure for the dementia disease at present, many of the problems associated with it such as restlessness and depression can be treated.

‘It may also be possible, especially in the early stages of dementia, to improve someone’s memory with medication’, he said.

Mr Owusu said people living with dementia and their caregivers can be helped in a variety of practical ways such as building on their strengths and abilities to ensure that affected ones maintain a sense of well-being throughout their lives.

He urged the public to exercise regularly and have proper meals to help lower the risk of some types of dementia which may directly benefit brain cells by increasing blood and oxygen flow to the brain.

‘Let us not discriminate against anyone with this condition. For them to have a good quality of life, they need a family as well as community support’, he said.