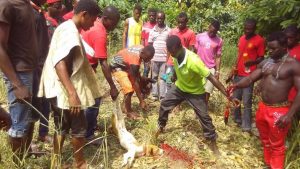 Some aggrieved youth the Nkroranza Municipality who placed a curse on the Chairperson of the Electoral Commission (EC) Madam Charlotte Osei and government officials and owners of various defunct micro finance companies in the area, have reversed the curse with a ‘white and brown dog.

The youth it would be recalled, called on a river deity to ruthlessly deal with the EC boss and wreck havoc in her family should she dare to rig the elections in favour of the ruling National Democratic Congress (NDC).

They were also reported to have asked Akonkontiwa shrine to pursue the woners of DKM, Jasta Motors, God is love among others spiritually and physically until victims who lost their investments are fully paid

But with barely 24 hours to the polls, the youth led by one Nana Nyarko Ababio slaughtered a dog at the Akonkontiwa shrine to reverse the curses

According to him, they had to do that in order to avert further deaths as some customers of Ponzi micro finance companies turned out to also be victims of their earlier curse

Nana Nyarko, who was also the former linguists of Nkoranza Traditional Area, explained that their decision to reverse the curse is as a result of a human face they have given to the whole incident.