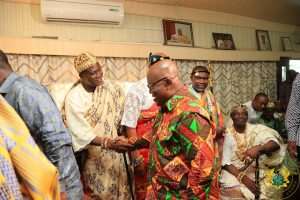 President Nana Akufo-Addo has advised inhabitants of the Volta Region to desist from acts that could create tension in the area following the decision to create the Oti Region out of the existing Volta Region.

According to him, the Oti Region will rather bring more development to the two regions and thus should be accepted by everyone.

“Please, we should not see it in an antagonistic way. It is not meant to be a prescription for making hostilities between one group of people and another lot of people. Volta Region is been noted for cohabitation amongst all kinds of people for a very long time. The creation of the Region is not intended to disturb it. In my view, God willing, it will in fact, heighten the cooperation, the collaboration and the friendship between all the people in the Volta Region,” he said.

President Akufo-Addo made the appeal when he spoke at a durbar of Chiefs and people of Adaklu in the Volta Region as part of his tour of the area.

President Akufo-Addo is currently on a three-day tour of the Volta Region which he began on Monday, July 9, 2018.

Prior to his visit, the President in June 2018 received the report from the Commission of Enquiry tasked to analyze petitions for the creation of additional regions in Ghana.

The committee proposed the creation of six new regions including Oti, located in the northern part of the Volta Region.

However, some people from the southern part of the Volta Region have kicked against the creation of the Oti Region claiming they were sidelined during the Commission’s hearings.

The group complained that the hearings were only held in the northern part of the Volta Region without the input of those in the south.

President Akufo-Addo urged the people to wholly accept the new region since it will inure to their benefit.

“So I am appealing to you that when this thing happens no one should accuse anyone [of doing anything untoward]. The reason is that it becomes a more efficient way of organizing the government of our country. And that will inure to our benefit as a country.”

New regions not for votes
The president again rejected assertions by political opponents who said the creation of the new regions is a vote-buying gimmick .

“There is no political underlying agenda in this thing. I am not doing it for votes. I don’t know how the people in this region are going to vote. That becase they have their region it means automatically they are going to vote for Akufo-Addo? Why is that the case? There are plenty of reasons why they don’t vote for me, why would there be a vote difference if this region is created? There is no political agenda in this matter, and there is no attempt to create ethnic antagonisms or passions in this exercise. It is meant to try to improve the governance of our people,” he added.