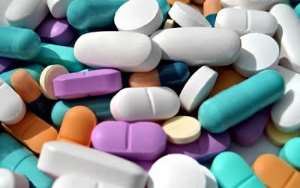 The pharmaceuticals industry is expected to reach $1 billion in value by end of 2018, but 70 percent of pharmaceutical products used in the country are imported.

Even though local manufacturers have capacity to fill the gap, Ghana still depend on the importation of pharmaceutical products, the Ghana Business Development Review Report has revealed.

The report, which was compiled by the University of Ghana Business School (UGBS), said most of the imports are from India and China, thereby leaving the local manufacturers with only 30 percent market share.

“The local industry has an installed capacity for both solid and liquid dosage forms to supply all domestic needs as well as enough for export. There is, however, capacity under-utilisation — less than 55 percent on average—as a result of inadequate resources,” states the report.

The report adds that some of the challenges that are limiting the sector’s growth include inadequate strategic focus and support on the part of government.

Another challenge of the sector has to do with limited expertise, which have resulted in the industry relying on India and China to fill vacancies for pharmaceutical technologists and industrial pharmacists.

Capital and high cost of borrowing was not left out in the report as part of the challenges of the industry. This, according to the report, makes it difficult for local manufacturers to compete with their fellows from outside the country.

These and many other challenges cited in the report also reflect on the sector’s growth and contribution to the economy.

Figures from the Ghana Statistical Service (GSS) show that the health and social works sector, of which pharmaceuticals is part, recorded a 32.7 growth in the first quarter of 2016, and the dipped drastically to 11.9 percent in the next quarter. In the third quarter, it inched up to 13.8 percent, only to relapse again to 8.9 percent.

In the first quarter of 2018, the sector’s growth has tumbled to 9.7 percent, another sharp decline from the 24.2 recorded in the previous quarter.

In terms of its contribution to GDP, the health and social works sector has not contributed more than 1.5 percent to the economy in the past twelve years. And even with that 1.5 percent, it was only in 2017 that it hit that ‘all-time record’.

As of July 2016, the pharmaceutical industry employed some 2,050 registered pharmacists in the country, with about 400 of them working in the public sector.

Drugs constitute about 60-80 percent of the cost of healthcare in Ghana. The local pharmaceutical sector is ranked as the tenth most attractive market in Africa and comes in at 21st place out of 31 countries analysed in the Middle East and Africa.

The pharmaceutical industry in Ghana and Nigeria earned a combined revenue of $1.6 billion in 2013 and it is estimated to reach $3.1 billion in 2018.