BREAKING NEWS
GMT+2 19:59
Home Showbiz Ebony Wouldn’t Have Believed If She Was Told About Her Accident 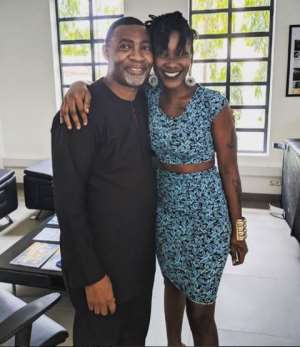 International Preacher and Economist Dr. Lawrence Tetteh who had an encounter with Dancehall Artist Ebony Reigns in her last days hasdisclosed that the latter sought after him for prayers and guidance as she was planning on embarking on a trip.

The songstress died in a motor crash which occurred in late hours of Thursday February 8, 2018 at Bechem in the Brong Ahafo Region along with two others, a military officer and a young lady identified as Franky Kuri who is said to be her personal assistant and best friend.

Commenting on the tragic incident on Hot 93.9FM’s ‘Maakye’ show with Kwabena Owusu, Dr. Lawrence Tetteh who expressed great shock at the sudden death of Ebony said she contacted him seeking for prayers and guidance as she was planning a trip to Europe of which he gave her audience and preached to her about Jesus Christ.

“Ebony not long ago came to see me to pray for her, and I prayed for her and spoke to her about Jesus Christ. She wanted to travel to Europe to Hungary, she even asked permission from the embassy if she can have audience with me and I gave her audience. I witnessed to her and prayed with her. Its very sad that after that not long encounter she passed the way she passed.” He said.

The Man of God who described Ebony as a vibrant young woman said she showed him so much respect and promised to come to church.

“She showed me a lot of respect and she was happy with the extension of that warmness I gave to her, it helped her and that’s why she put it on instagram. She wanted to come to church so it was something everybody was happy that she opened up like that. She said I talked to her like a father so she referred to me as Daddy and of course she was about the age of my children so it was heartwarming that she received Christ.

“I’m sad and very shocked because you wouldn’t even want to wish this on your enemy. It’s very painful that a vibrant 20year old passed away like that.” He sadly said.

Sympathizing with Family and friends of the deceased, Dr. Lawrence Tetteh cautioned celebrities and the youth to worship, love and fear God since no one knows how the are going to end up.

“If we can love God, fear God and worship God, he will guide us because we all don’t know what our end will be. If Ebony was told that she will have an accident and die, she would not have believed it.

So let’s all learn to fear God.”