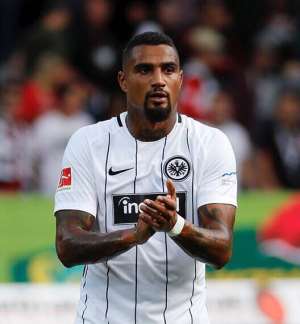 Bundesliga side Eintracht Frankfurt has been handed a massive boost ahead of their clash with Hoffenheim on Saturday following the return of Ghanaian international Kevin Prince Boateng from injury.

Boateng who was reported to have picked a slight injury before the international break trained with the side on Tuesday to prepare for the clash with Hoffenheim on Saturday.

The midfielder had complained after the game against Bremen – which Eintracht Frankfurt won 2-1, over calf problems and was therefore spared in the test against Sandhausen.

Boateng has been an influential character for Eintracht Frankfurt since joining from La Liga side UD Las Palms.

The Frankfurt side has seen a consistent rise in performance since the Ghanaian international joined them in the summer.

Boateng’s return will be a major relief to Niko Kovac’s side as they face Hoffenheim on Saturday in a bid to maintain their winning streak.