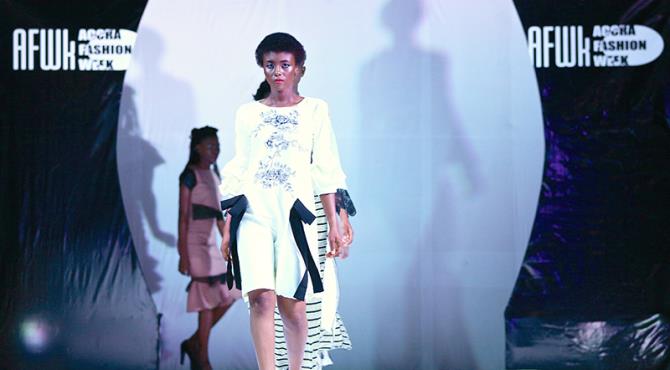 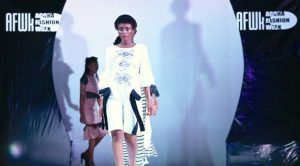 Grace Quaye made headlines as she scooped the title ‘Face of Accra Fashion Week 2016’ circulating her face in both local and international press. Today Grace Quaye covers the ‘Industry Rebels’ issue of FashionGHANA.com Magazine in clothes by Bri Wireduah and FashionGHANA.com. The first cover to be produced by FashionGHANA in two years.

The front cover, shot by Nana Tamakloe, was inspired by the historical image of Huey P Newton, American freedom fighter and founder of the Black Panther Party, sitting on what is known as a king’s/Queen’s chair. The image was recreated to celebrate Grace Quaye’s reign as a new queen in the modeling world and also to commemorate the 50th anniversary of the Black Panther Party, which was well fitting of the issue ‘Industry Rebels’.

FashionGHANA.com’s fashion covers have always reflected the current state seen fit of the fashion world, mainly in Ghana and Africa. The ‘Industry Rebels’ magnifies the birth of a new generation of fashionista’s that are revolutionizing the traditional forms of Ghanaian fashion circle which has not been able to connect with the general society for years.

With a new wave of designers, models, bloggers, photographers fashionistas and the successful inaugural edition of Accra Fashion Week, it seems there is another future for fashion lovers and fashionistas in Ghana than to confirm to the norm.

So look forward to a lot of articles and fashion shoots from this perspective showcasing the new storming Fashion movement in Ghana, as well as your regular dose of fashion updates

only on FashionGHANA.com. The industry cover of ‘Industry Rebels’ is yet to come which will see a figure from the fashion world (not a model) grace the cover. FashionGHANA also promises to get back to their regular release of Fashion covers in the months ahead So keep an eye out.