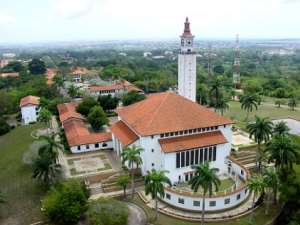 “‘Yes, next person,” someone in a white robe calls out from what looks like a cage. You don’t quite see his round spectacles from afar until you get closer.

“Put your card in the box over here and wait for me on the bench,” the man in white says to almost every patient.

But today, the man in white, Mr. Richard Owusu-Ansah, asks two of them to wait. He says he will talk to them privately., The two patients Owusu-Ansah, a pharmacist at the University of Ghana students’ clinic, has asked to wait need special attention, confidentiality, and counselling because they have been infected with some sexually transmitted infections (STIs).

“We treat some students and the same people come again after two weeks with the same condition,” the nurse lamented. “Some of them go back to their partners again after treatment.”

Mr. Owusu-Ansah, said even though STIs are mostly contracted through sex, students who visit the clinic with these cases attribute them to other things such as their washrooms.

“Sometimes when they come and you ask them whether they are sexually active, the say no because they are shy,” Mr. Owusu-Ansah said. “The only reason we want to know is because we have to treat their partners too but they will not tell us the truth.”

He also said some of the students who are honest enough to tell them how they got it usually cannot bring their partners because they have multiple sex partners and may not know which of them they contracted the infection from.

On average, about 10 STI cases every week are treated, according to the clinic staff. Mr. Owusu-Ansah said they usually advise students who have been treated to protect themselves when they want to have sex.

“They are mature people, you can’t control them so the only thing is to counsel them,” he said.

Alarmed by the clinic’s STI statistics, Churchill Ashong, a level 400 Computer Science student said he believed it would even go high if all infected students visited the clinic. He said most of the students for fear of stigma treat it at home.

“My friend had gonorrhea and always complained of pains when he was urinating but I didn’t hear him say he visited the clinic,” Ashong said.

The clinic currently works in partnership with the University’s Careers and Counselling Center to counsel students who have been infected on effective ways to prevent subsequent infections.

(The writer is a student the Department of Communication Studies, University of Ghana. You can contact him at eugeneanyarko@gmail.com)