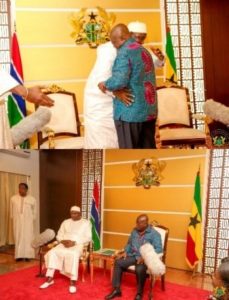 Accra, April 29, GNA- The Gambian leader Adama Barrow, on Friday expressed gratitude to President Nana Addo Dankwa Akufo- Addo and lauded his role in the efforts by regional heads to preserving the fledgling democracy of his country.

‘My coming to Ghana is for a simple reason. My message is to come and say thank you. We have a proverb in our own saying: ‘If you want to praise a farmer and you want to thank him for a remarkable job, a job well done, you have to visit him at his or her farm.’ That is why I am here today. I could have written a letter or sent a Minister, but I said that is not enough. I have to come and say thank you.

‘I think, Africa has come very far now. The problem was an African problem, and the solution was an African solution. That is a credit to all Africans,’ he said.

On January 19, barely two weeks after taking office, President Akufo-Addo approved and authorised the deployment of a combat team of 208 troops, backed with the appropriate logistical equipment, to The Gambia as part of the ECOWAS Mission in that country.

The objective was to create an enabling environment for the effective enforcement of the rule of law, and, in accordance with the Constitution of The Gambia, facilitate the inauguration of the President-Elect, Adama Barrow, after the refusal of President Yahaya Jammeh to accept the verdict of the people in the elections of December 1, 2016

President Barrow was unequivocal that ‘Africa cannot move forward without the principles of democracy. We contested elections based on those principles, and we will continue to advocate… the same principles’.

He expressed gratitude for the warm welcome afforded him by President Akufo-Addo and expressed the desire to foster strong bilateral relations.

‘Ghana has gone far, and we are here also to learn, so that we can gain experience. We need your support.’

President Akufo-Addo said: ‘it is a joy for us to see you here with us in Ghana. I will always have you closely associated with my memory because one of the first important decisions I had to take when I became President was over The Gambia. And that was the decision I made to support the ECOWAS military force with Ghanaian troops.’

He said the decision to intervene in The Gambian impasse was for three reasons: firstly, to ensure that the will of the Gambian people was not thwarted by an outgoing President; secondly, for the opportunity for ECOWAS to act as a collective unit with a common purpose and objective; and, thirdly, the peaceful resolution of the crisis through diplomacy and the threat of military intervention.

‘All of that means that the actions that ECOWAS took, which was supported actively by some of us, stand vindicated by history. You have become a symbol of all of that,’ President Akufo-Addo said.

He said: ‘Ghana, today, is determined to go down the path of democratic accountability. Our people have indicated on several occasions, in the last generation, how attached they are to democratic values and the principles of democratic accountability. For us, you are a good friend, a friend fighting the same cause our people have embarked on, that is, developing our nations under free political institutions, and giving the right to our people at any one stage to decide who should govern them in a peaceful and dignified manner.’

President Akufo-Addo assured President Adama Barrow that ‘Ghana has been a friend, is a friend and will still continue to be a friend,’ to The Gambia.

President Adama Barrow has since left for The Gambia.