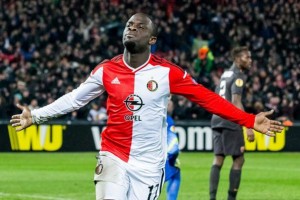 The former Dutch U21 star joined the Seagulls in August 2015 from Eredivisie powerhouse Feyenoord Rotterdam on a three-year-contract.

Manu struggled for game time at Brighton since his arrival, failing to start a game for Chris Hughton’s side.

“The form of our other strikers has made it hard for Elvis to get game-time,” Brighton boss Chris Hughton explained the reason for the attacker’s departure.

Manu told Ghanasoccernet.com in October 2016 that he would leave the Championship side for playing time reasons.

Manu’s main task will be to score goals for Go Ahead Eagles who are languishing at the bottom of the Eredivisie table.

He excelled on loan at Cambuur during his spell at Feyenoord in the Eredivisie.