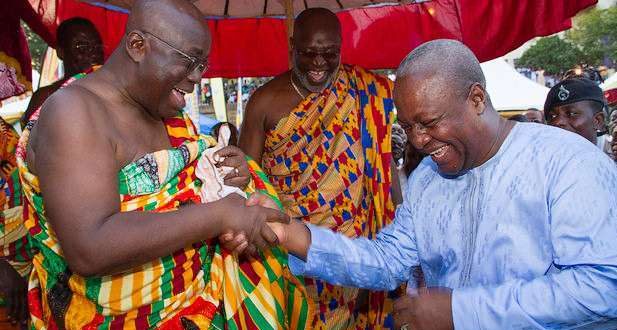 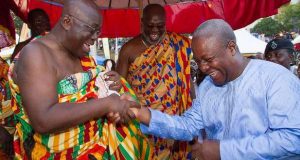 Ghanaians in an electoral dilemma hours after the close of the December 7 Election as both the ruling National Democratic Congress (NDC) and the main opposition New Patriotic Party (NPP) have usurped the powers of the Electoral Commission and claimed victory.

Ghana News Agency nationwide assessment indicates that followers of the two parties are gearing up with optimism; whilst Eminent Persons including Religious Leaders, Civil Society Orgnisations and Traditional leaders have initiated background moves to engage the leadership of the two parties.

The National Security Operatives – Ghana Armed Forces, Ghana Police Service and allied operatives are on high alert patrolling some electoral hot spots and monitoring activities at the headquarters of the two major parties the NDC and the NPP.

The NPP was the first to declare victory claiming that out of the 27,577 of pink sheets at polling stations and centres received by the party; indications were that their presidential candidate Nana Addo Dankwa Akufo Addo had taken a commanding lead in the polls.

The NPP claimed that the difference between the two presidential candidates was a clear non-rigable margin and the NPP had won a landslide victory.

Mr Koku Anyidoho, Deputy General Secretary of the ruling NDC, also followed up with another press conference claiming that President Mahama has won the Presidential Elections with 50.6 per cent of the valid votes cast in 166 Constituencies out of the 275, whilst the NPP Candidate followed with 49.4 per cent.

The EC has however urged the political parties to desist from declaring the results of the election, explaining that the law of the country only mandates the Commission to declare election results.

Mr Samuel Tettey, the EC Director of Electoral Services, speaking at a press conference said the declaration of the results by both NPP and NDC claiming victory is unconstitutional.

Mr Tettey urged the public to remain calm as they await the election results.

He said the delay in the results being released was due to the fact that under the new system the EC was combining manual and electronic means in the compilation of the outcome.

Sources with the National Election Security Task Force and a Technical Committee to ensure peaceful, free and fair elections has told the Ghana News Agency the taskforce was analyzing the security situation.