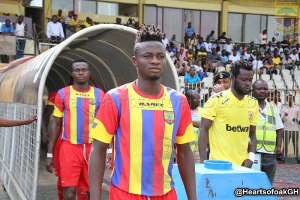 Hearts of Oak defender, Fatawu Mohammed has called on the management of the club to increase the proposed GHC25, 000 if they want him to stay.

The energetic defender’s contract runs out at the just ended season but he is ready to stay with the club if the proposed GHC25, 000 is being increased.

“Hearts of Oak offered me GHC 25,000 but is too small. I told them to add something to it; I want to continue with Hearts of Oak, I still consider myself as one their players.” Fatawu told Nhyira FM

Fatawu Mohammed also debunked the rumours that he is in Saudi Arabia and close to sign for a club there.

“I didn’t travel to anywhere after the FA Cup final, I asked the management permission to allow me to stay back at Tamale. I have been in Tamale since I didn’t even step my leg at Kotoko Airport.” He added.

The Phobains have been dealt with a huge blow after seven of their senior players refused to extend their contract after ending the 2016/17 trophy-less.