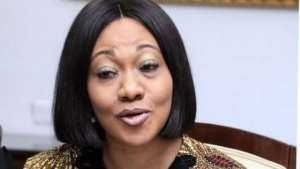 Deputy Chairpersons of the Electoral Commission Dr Bossman Asare and Mr Samuel Tettey were sacked from a meeting with Parliament’s Special Budget Committee which is considering the 2022 budget estimates of the election management body.

The two deputies failed to justify the absence of EC Chair Jean Mensa at the meeting.

The Committee said it will not discuss the EC’s budget until Mrs Mensa showed up in person at the meeting.

It noted that there were important constitutional matters, including the creation of a constituency for Santrokofi, Akpafu, Lipke and Lolobi (SALL), which Mrs Mensa needed to address.

Speaking to the media later, a member of the committee, Mr Ahmed Ibrahim, who is also the First Deputy Minority Whip, said all the other constitutional bodies have appeared before the committee with their chairpersons and CEOs and, so, “it will not be fair to them” if Mrs Mensa is left off the hook.

He said Mrs Mensa is fond of dodging such invitations.

“When we went to Rock City to do the mid-year budget performance review, she could not come; her deputies arrived. We listened to them”.

“So, we were with the view that when we come for the budget hearing, she will come”.

“So, it was unfortunate that she was not here”, he bemoaned, adding: “But there are serious constitutional issues that would be raised in the budget hearing”.

“We cannot claim to be representing the people of Ghana when some of them have no representation. And, if you keep quiet on this, then who else will speak for them.”

“We need to know her policies, juxtapose them with the estimates and the figures, then assess her performance in the previous budget before we can approve the 2022 one,” he said.