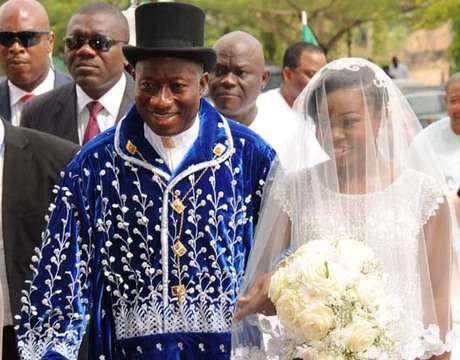 Faith is the former President’s first child and when she married on April 12 2014 , it was a shut down of lavish proportions.

Let’s take you back to when Goodluck Jonathan’s daughter Faith Sakwe, tied the knot with Godswill Edward in a grand, lavish ceremony in Abuja!

Faith is the first child of the former President and on April 12 2014 when she walked down the aisle at Abuja Ecumenical Center, the ceremony got aired live on NTA!

We remember well the breathtaking crystal encrusted dress she wore. With that majestic cathedral train fit for royalty, how could anyone forget the gown so easily?!

Such was the opulence of the lovely presidential ceremony in 2014 that guests reportedly got customised gold-plated iPhones as souvenirs!

The couple also had a 9-tier wedding cake made in Nigeria’s white and green, as well as numerous distinguished guests amidst the littest pomp and flash, pretty much like was witnessed at Dangote’s daughter’s wedding last month in Lagos.

It’s now been four years since that huge wedding party of Faith Sakwe and Godswill Edward, and as expected, they are really, really excited about their anniversary as our story here reads.