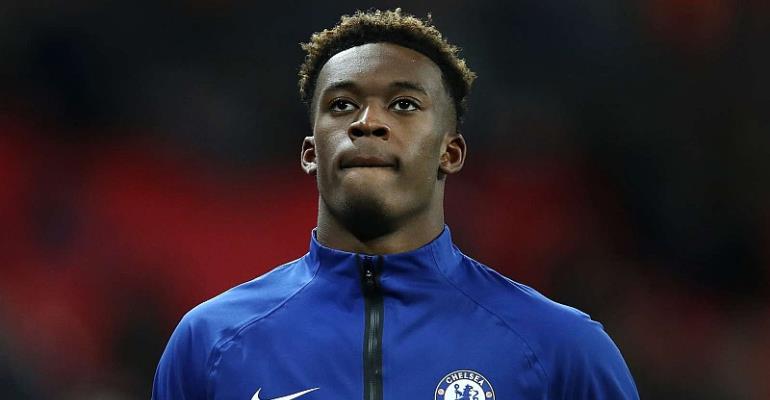 Chelsea manager, Maurizio Sarri says Callum Hudson-Odoi is staying at the club despite huge interest from Bayern Munich and also insisted it’s also possible that he won’t be allowed to quit in the summer either.

The English born Ghanaian international has emerged as a top target for the German Bundesliga side in the winter window.

The reigning German champions have publicly expressed their desire to sign the 18-year-old winger.

It emerged that Hudson-Odoi was keen to join the Bavarians and handed in a transfer request to try and force a way out of Stamford Bridge.

That was, however, rejected by Chelsea, who are keen to keep the teenager on their books despite him not having been a first-team regular in the 2018-19 season.

Ruling out a transfer to Bayern, Sarri told reporters: “I am not frustrated [with Hudson-Odoi]. On the pitch, he’s doing very well: very well in training, very well in matches. So I’m really very happy with him.

“I’m not happy with the situation, of course, but I know very well that every big team here in England has the same problem. It’s not easy to keep these young players. He is, of course, one of the best 18-year-olds in Europe, so it’s very difficult.

“But, as I said before, the club told me he is off the market, for sure. And, probably, he will be off the market in July, too. I don’t know [if he’ll be happy with that), but I can say what I see on the pitch. On the pitch at the moment, he’s fantastic].”

Hudson-Odoi has been used sparingly by Sarri thus far this season, with the England youth international struggling to earn a place in the starting XI ahead of the likes of Eden Hazard, Pedro and Willian.