BREAKING NEWS
GMT+2 06:25
Home Sports I Will Eradicate Corruption From Ghana Football If Am Voted As GFA President – Alhaji Grusah 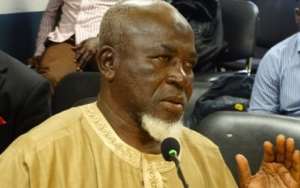 The astute football administrator has declared his intention to contest for the Ghana FA top seat in a bid to succeed Kwesi Nyantakyi who held the position for almost 13 years.

However, the King Faisal owner is undeterred and has more evangelical about his message of reviving Ghana Football and stamp out corruption from the game.

“I have so many things to bring on board when I am elected as the FA president,” he told Agyenkwa FM in Kumasi.

“I will change a whole lot of things. The Status and Congress will be consulted. I will call for Congress and also consult the Executive Committee to deliberate on issues.”

“I will help to do away with corruption in Ghana Football. We don’t adhere to the principles of football.”

“I have so many plans to bring on board. I will help to develop our colts football and also develop the academies.”

“I will do well to change Ghana league for it to become more attractive.”

“I will also bring a lot of enthusiasm in football. I will also tap into the expertise of astute football personalities like Kwabena Yeboah and Dr Kwame Bash Nyarko to help my administration.”

“In the nutshell, I will stand for the truth if I am given the nod as the GFA President,” he ended.

The Normalization Committee who were brought into office after the premiering of the Anas Aremeyaw Anas ‘Number 12’ video has been tasked to cleanse football before a new president is elected.