I’m Not Aware Of The Latest Corruption Perception Index – Rawlings 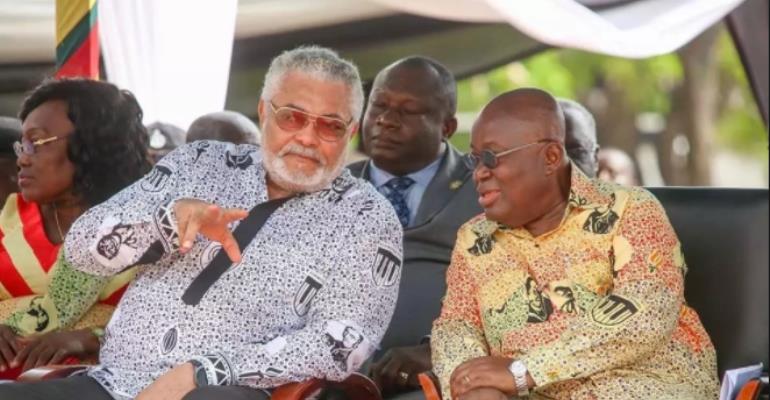 Former President Rawlings in a chart with President Nana Addo

Former President Jerry John Rawlings has said he is unaware of the latest Corruption Perception Index (CPI) indicting the government of Ghana of doing little to fight the canker.

Ghana was ranked 81 out of 180 countries in the 2017 CPI released on Wednesday by Transparency International, scoring 40 as against last year’s score of 43 and dropping 11 places in the process.

It is Ghana’s worst performance in the last six years in its fight against the canker.

Quizzed on the latest CPI, Mr. Rawlings who is widely known for his great abhorrence of all forms of public sector corruption, stated that he is ignorant of the latest index.

“I am not aware of it,” he told Starr News’ Daniel Nii Lartey on the sidelines of a state burial organised for the late Professor Francis Kofi Allotey Friday noting that he would comment on it after getting himself abreast with it.

Asked if he thinks generally, corruption is being fought under president Akufo-Addo, the former Military leader said the appointment of Martin Amidu as Ghana’s first Special Prosecutor by the President is a “vindication of his stance” as far as corruption is concerned.

The President’s fight against the canker, he said, would not be an easy one unless “we all get involved.”

According to Mr. Rawlings, Mr. Amidu’s appointment would help “restore integrity back into governance; that we can’t get into government with impunity to steal and corrupt institutions and go with it.”

It comes after his nomination was unanimously approved by Parliament Tuesday following a grueling vetting.

Parliament passed the Special Prosecutor Bill making it an Act of Parliament on November 14, 2017.

The Office of the Special Prosecutor is aimed at helping the government handle corruption-related issues among state officials in a nonpartisan manner. The Office is also expected to help reduce the workload on existing investigative agencies and, thereby, enhance their effectiveness. The establishment of the Office of the Special Prosecutor has become necessary in view of the institutional bottlenecks that impede the fight against corruption.