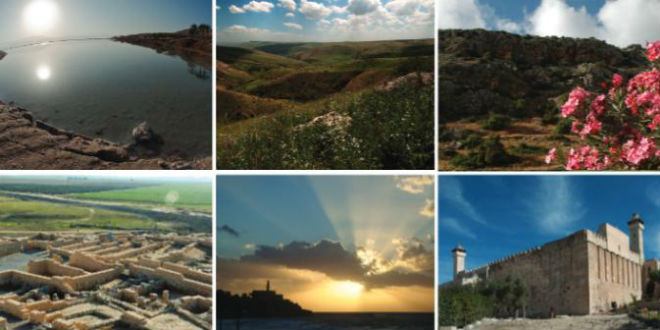 One of the most incredible things about the land of Israel is that you can’t go far without meeting an ancient place which was mentioned or described in the Bible. From ancient times until today, the mountains, valleys and lakes where Biblical matriarchs and patriarchs walked, lived and communicated with God have endured in the Land, creating a country so rich in history and meaning that it is impossible to see its beauties without acknowledging the creator of all. In an effort to share the land’s Biblical and divine beauty with her supporters, Israel365 put together a calendar which showcases one breathtaking Biblical site for each month of the year. Take a look and bear witness to the evidence of God on earth.

The scene of the Prophet Elijah’s dramatic victory over the priests of Ba’al (I Kings 18:16), Mount Carmel towers 1,800 feet over Israel’s coastal plain. Elijah’s fire continues to burn, attracting many faiths and cultures, as the Carmel is host to a monastery, a Bahai Temple, and Druze villages. The lush mountain was used in the Bible as a metaphor for beauty (Song of Songs 7:6) and is covered with pine, olive, laurel, and oak trees. Archaeologists have discovered remains of many wine and olive presses, industries that are now returning to the region. It majestically overlooks the Mediterranean and Haifa, Israel’s third largest city.

According to tradition, Sodom and Gomorrah, the Biblical cities destroyed by God for their evil, lie beneath its surface (Genesis 19:24). No fish are found in the sea, but brackish ponds dotting the shore support a myriad of life in a prophetic manner presaging the Messiah (Zechariah 14:8). At 1,400 feet below sea level, the Dead Sea is the lowest point on the face of the planet. More than eight times saltier than seawater, the water is so dense that bathers float effortlessly on its surface, soaking up its healing qualities. Today, beaches, resorts, and spas dot its shores.

When Joshua arrived in Israel (Joshua 1:1), Jewish tradition states there was already a walled city on the shores of the Kinneret, also know as the Sea of Galilee. Visitors today will only find remnants of those walls, but prominent rabbis and sages throughout the ages lived and died on the shores of the sea. The tombs of  Rabbi Akiva from the Talmud, and his student Rabbi Meir both attract thousands of modern pilgrims, as does the tomb of Maimonides, situated inside the city of Tiberias. The Kinneret is also believed to be the burial place for Miriam’s well. Legend maintains that those who drink from its waters will become wise in understanding the Torah. In modern times, Israel’s largest source of freshwater is also a popular vacation resort.

As the first spiritual capital of Israel, Shiloh was home to the Tabernacle (I Samuel 3:21)for over 360 years and the final destination of the Jews’ tri-annual pilgrimages. Hannah came to the site to pray for a son (I Samuel 1:10), and her prayers were answered when her son Samuel, soon to be one of the greatest prophets, was born (I Samuel 1:20). Situated in the ancestral territory ceded to the tribe of Ephraim, the modern city of Shiloh is in Samaria, home to archaeological digs and a museum educating visitors about the Tabernacle.

Israel’s highest peak (7,300 ft) figured prominently in the Bible and was mentioned in Psalms as “the Dew of Hermon” (Psalms 133:3). The peak marked the northernmost border of the half-tribe of Menashe. Formerly a Syrian army outpost used for shelling Israeli settlements, it is now Israel’s only ski resort and an IDF base.

The distinctively rounded mountain rises 1,900 feet in the middle of the Jezreel Valley, earning its name (Jeremiah 46:18), which means ‘navel’ in Hebrew. Its unmistakable presence made it the landmark border between the tribes of Zebulun, Issachar, and Naphtali. In the days of the Temple, a bonfire lit on its peak was part of a series that went out from Jerusalem, announcing the new moon to the Jews outside of Israel. The mountain overlooked the victory of the Prophetess Deborah and her general, Barak, over Sisera and the Canaanites (Judges 4:14). Today, a Roman Catholic Church and Eastern Orthodox Church stand on the mountain.

Originally purchased by Abraham from Ephron the Hittite to bury his wife (Genesis 23:16), Sarah, the Machpelah cave in Hebron became the burial site of all the patriarchs and matriarchs, except for Rachel (Genesis 35:19). It became a Levitical city – a city for priests and Levites – as well as a Biblically-mandated city of refuge in the ancestral land of Judah. King David was anointed in Hebron (II Samuel 2:4) and made it his capital for seven years until he established his dynasty in Jerusalem. Holy to Judaism, Christianity, and Judaism, it is the focus of reverent prayer and intense conflict.

A port city belonging to the tribe of Dan since Biblical times, Jonah’s flight from his divinely ordained mission began in Yaffo (Jonah 1:3). King Solomon floated cedars from Lebanon into the port to build the First Temple (II Chronicles 2:15), as did Ezra for the Second Temple (Ezra 3:7). The Arabs in the city surrendered to the Haganah, the precursor to the IDF, in 1948 when Israel became a state, and Old Yaffo is now considered an artists’ enclave in bustling Tel Aviv.

With its name meaning either ‘the seventh well’ or the ‘well of the oath’, this oasis was visited by every patriarch in turn. Abraham made a pact with Avimelech (Genesis 21:31), Isaac built an altar there (Genesis 26:25), and Jacob had his dream of angels after leaving the site (Genesis 28:10).  Ceded to the tribe of Shimon, it was mentioned several times in the bible as marking the southernmost border of Israel (Judges 20:1). The seven fabled wells exist to this day, in what is now Israel’s fourth most populous city.

Meaning ‘God will sow’, the Jezreel valley is home to some of the most fertile farmland in Israel. King Ahab caused his own downfall when he coveted the vineyard of Navot that was planted in the Jezreel Valley (I Kings 21:1). The flat plain belonging to the tribe of Menashe was the scene of many battles. Gideon fought  the Midianites, the Amalekites (Judges 6:33), and the Children of the East successfully there, but the valley also saw the defeat of King Saul at the hands of the Philistines (II Samuel 4:4). It was mentioned by Isaiah (I Kings 18:46) as the only route that led from the Mediterranean Sea into the interior of Israel without going over the central mountain range.

The eternal capital of the Jewish People, Jerusalem has been holy to the Jews for 3,000 years and is mentioned no less than 669 times in the Bible. First alluded to as the domain of Malkitzedek, king of Shalem (Genesis 14:18), a righteous man who befriended Abraham, it was the place God commanded Abraham to sacrifice his son Isaac (Genesis 22:9). On the border between Judah and Benjamin, King David conquered it from the Jebusites (II Samuel 5:6), making it his capital and designating it as the site of the Temple his son, Solomon, would build (II Chronicles 3:1). Today, Jerusalem remains the holiest city in the world and the destination for pilgrims of all faiths.

A small stream runs down the center of the fertile valley, showing precisely where young David gathered smooth stones for his sling when he faced off against the formidable Goliath (I Samuel 17:2). It is easy for present day visitors to imagine the vast armies of the Philistines and Israel facing off. It is still home to many of the terebinth trees is was named for, but the valley’s most distinctive landmark today is the antenna farm with 120 satellite dishes connecting Israel to the heavens in a  more contemporary manner.