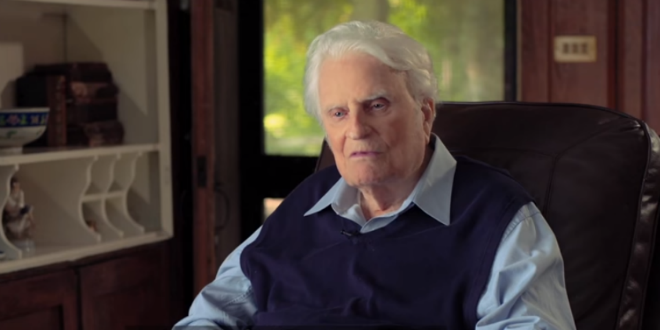 Reverend Billy Graham, a powerful advocate of Israel and one of the most influential Evangelical leaders of the era, passed away on Wednesday at the age of 99.

In a career that spanned six decades and reached all corners of the world, his message of faith was listened too by over 215 million followers. Recently, Newsmax voted Reverend Graham one of the most influential Evangelicals in America, praising him for his influence that crossed all boundaries.

“Graham opposed racial segregation in the 1950s, integrated his services, and worked to dismantle the black and white divide in America’s church,” the article read. “He advised U.S. presidents on spiritual matters over the course of five decades.”

In particular, Reverend Graham is remembered for his efforts at healing the rift that has separated Jews and Christians for the last millennium. After the Six Day War in 1967, Reverend Graham spoke about his support for the  Jewish People in an interview saying, “the Jews are God’s chosen people. We cannot place ourselves in opposition to Israel without detriment to ourselves.”

Rabbi Yechiel Eckstein, founder and president of the International Fellowship of Christians and Jews, worked with the reverend and his institutions for over thirty years and shared words of praise for Graham.

“He was deeply committed to his Christian Faith but at the same time, he was tolerant and loving to those who did not share his faith,” Rabbi Eckstein told Breaking Israel News.

“His uniqueness was that he transcended all categories. Everyone respected him and appreciated him, including Jews. There is no one today that overcomes barriers and unites people of faith and conviction as successfully as he did.”

Unsurprisingly, Graham was pivotal in helping to open the doors towards a long-lasting relationship between evangelical Christians and Jews.

“Graham’s influence helped start the very first dialogues in history between Evangelicals and Jews,” Eckstein noted. “Without his presence, I doubt Jewish-Christian relations would be where they are today. He had deep and powerful Christian convictions but he was open and respectful to Jews and Judaism.”

“He was one of the first Christians to endorse the State of Israel and urge his followers to stand with her at all times,” Eckstein continued. “He was ahead of his time and set the pattern for what later became Christian Zionism.”

Rabbi Eckstein also credits the reverend for the success of his fellowship.

“The fellowship I founded 35 years ago which has built bridges of understanding between Christians and Jews would in all likelihood not have succeeded as it has without Reverend Graham’s leadership.”

Rabbi Shlomo Riskin, Chief Rabbi of Efrat and the founder of The Center for Jewish – Christian Understanding and Cooperation (CJCUC), mourned the reverend’s passing.

“Reverend Graham was a magnificent preacher who loved the Old Testament. He was a sincere and true friend of the Jewish People with a great admiration for Israel. He had faith that it was the promised land of the Jewish People and would now be ours forever. The reverend truly believed in Christians and Jews working together to bring peace and redemption to the world.”

Josh Reinstein, President of the Israel Allies Foundation and director of the Knesset Christian Allies Caucus, praised Reverend Graham as a light for future generations.

“Rev Graham was a dear friend of Israel,” he said. “We can only hope that the new generation of pastors takes his example in standing for the Jewish State and its people.”

Reverend Graham, was ill with Parkinsons Disease and passed away at his home in Montreat, N.C.