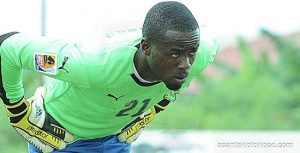 Aduana Stars goalkeeper, Joseph Addo, has renewed his contract with club after penning a three-year deal which will make see him earn Ghc90,000 thus Ghc30,000 per annum. موعد انطلاق يورو 2022

The Black Stars goalkeeper on Thursday extended his stay with the club having an a fruitful 2016/17 season for both club and country.

The former U-20 goalkeeper helped Aduana Stars lift their second Ghana Premier League trophy as well as aiding the Black Stars B team in lifting the 2017 WAFU Cup of Nations. انواع العاب القمار

Addo joined Aduana Stars from Kotoko two seasons ago and has become an integral part of the squad, as he quest to take Aduana Stars to greater heights in next season’s CAF Champions League. روبي كازينو