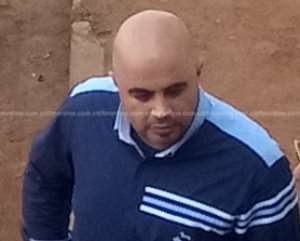 There appears to be a new twist to the case involving the 39-year-old Lebanese, Rabin Haddad, who allegedly assaulted and raped his 19-year-old house help in his Airport Hills residence in Accra.

In this latest development, a police Forensic Science Laboratory report, dated 4th January 2018, makes a startling revelation that could have an impact on the outcome of the case.

According to the report, titled The Republic Vrs Rabih Haddad, Lab No. DNA 66/17, “the virginal swab cuts reacted negatively to the test of human semen” and that “based on the DNA analysis, the suspect Rabih Haddad can be excluded as a contributor to the DNA profile obtained from the Exhibit”

The DNA report, a copy of which is in the possession of this news portal, as part of its conclusion stated that “the victim, Esther AkuviAdje, is the sole contributor/source of the DNA profile generated from the Exhibit.”

As the Accra Central District Court gears up to pass judgement in the coming days, there are clear indicators that this new development is likely to have an impact on the judgement day.

It would be recalled that Haddad, media reports say, was arrested on December 3, 2017, after a complaint had been lodged at the Domestic Violence and Victims Support Unit (DOVVSU) of the Ghana Police Service and the Airport Police for allegedly sexually molesting his house help.

He was said to have consistently harassed the house help (name withheld) and insisted on having sex with her but she reportedly kept rejecting his sexual advances towards her.

He, however, purportedly managed to forcibly have sex with her on November 30, 2017, when his wife was not at home; and the victim reportedly confided in her co-worker, but both initially kept the matter to themselves for fear of that they might lose their jobs.

Rabih Haddad was dragged before the court for rape contrary to Section 97 of the Criminal Offences Act 29/60. His plea of not guilty was not taken.

His lawyer, Ralph PokuEdusei, prayed the court to grant him bail since he was suffering from cardiac cell damage – a heart condition which he said would not allow his client to be confined.

According to Mr. Poku Edusei, if the court denied the accused person bail, the court risked trying a dead body as he would die, should he be confined.

He stated that the accused, while in police custody, fainted and had to be rushed to the hospital by police officers.

He pleaded that should the court find it necessary to remand the culprit, then he should be confined to a hospital.

Former Attorney General Marietta Brew Appiah-Oppong, could not help but watch keenly as the proceedings unfolded.

The prosecution, led by Superintendent of Police KwakuBempah, opposed the granting of bail and prayed the court to remand the accused person at the Cantonments Police Station – which is close to the Police Hospital – so that he could receive medical attention when the need arose.

The presiding magistrate, AritNsemoh, denied the bail application, saying she did not have original jurisdiction over the matter.

She said she was only a relieving judge and therefore urged the lawyer to make a repeat application of bail when the matter is put before the substantive judge.

She remanded the accused into police custody to reappear on December 10, 2017.

Presenting brief facts of the case to the court, the prosecution indicated that Rabih Haddad, after forcibly having sex with the victim for the first time, attempted to have sex with her again on December 3, 2017, when his wife was not at home.

He said the accused asked the victim to prepare coffee for him on the day of the incident and when she went to the kitchen to prepare the coffee, the accused approached her and demanded to have sex with her.

Superintendent Bempah stated that the house help resisted Haddad’s sexual advances but he slapped her, dragged her into his master bedroom and raped her.

The prosecutor said the victim narrated her ordeal to her co-worker, who also gave the information to a police officer on duty at a nearby house.

He added that the matter was reported to the Domestic Violence and Victims Support Unit (DOVVSU) and the Airport Police and the accused was subsequently arrested.

According to him, a medical form was given to the victim to attend hospital and that an interim report had been received and a DNA analysis was being conducted to ascertain the rape claim or otherwise.