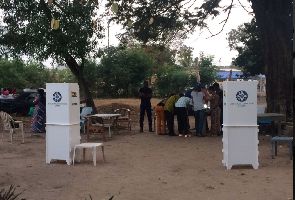 LIVESTREAMING: Ghanaians go to the polls

After vigorous and hectic campaigning characterised by accusations and counter accusations by the contesting political parties in this year’s election, Ghanaians will today have the opportunity to either renew the mandate of President Mahama or elect a new leader.

About 15.8 million Ghanaians are expected to vote at 29,000 polling stations across the country to elect a President and 275 parliamentarians.