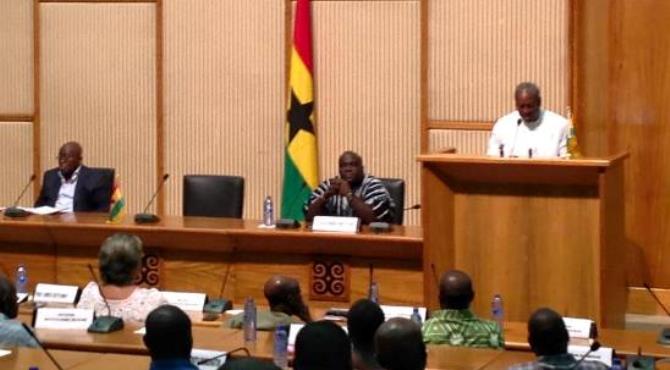 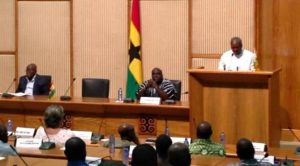 The transitional team to facilitate the change of government in the country has officially been inaugurated.

The team was inaugurated at a short ceremony held at the Accra International Conference Centre (AICC), today, Sunday.

This follows the Electoral Commission’s declaration of the New Patriotic Party’s Nana Akufo-Addo as president-elect after a keenly contested general election on Wednesday, December 7. President Mahama on Saturday announced the 16-member team comprising seven members of the National Democratic Congress government and nine from the NPP.

A statement signed by the Minister of Communications, Dr Edward Omane Boamah said the team would also include the Head of the Civil Service, Head of the Local Government Service, Secretary to the Cabinet and the National Security Coordinator in accordance with the provisions of the Presidential Transition Act 2012 (Act 845). The team is expected to commence with expediency ahead of the of the official swearing-in of the President-elect, Nana Akufo Addo as President of the Republic on January 7, 2017. Among the things the team is to consider are accounting for government resources, agreement on the deadline for the vacation of official residences by government officers and payment of benefits.

Members of the team area:

In accordance with the provisions of the Presidential Transition Act 2012 (Act 845), the following are statutory members of the Transition Team:

President John Mahama had earlier assured of ensuring the peaceful transfer of power to the President-elect Nana Akufo-Addo. In his concession speech after the declaration of Akufo-Addo as President-elect, he said, “I will like to assure the people of Ghana of my commitment to the sustenance of our country’s democracy and we will work to ensure a smooth transition of our incoming administration. I remain committed to the unity and stability of our great nation.”

Ghana’s parliament in October 2016 passed the Presidential transition bill which among other amendments, stipulates that the outgoing President and his Vice vacate official bungalows one month before swearing-in of the new President on January 7. The Bill, also grants the Office Administrator General, legal powers to forcefully evict an outgoing President and his or her Vice when they exceed the grace period.