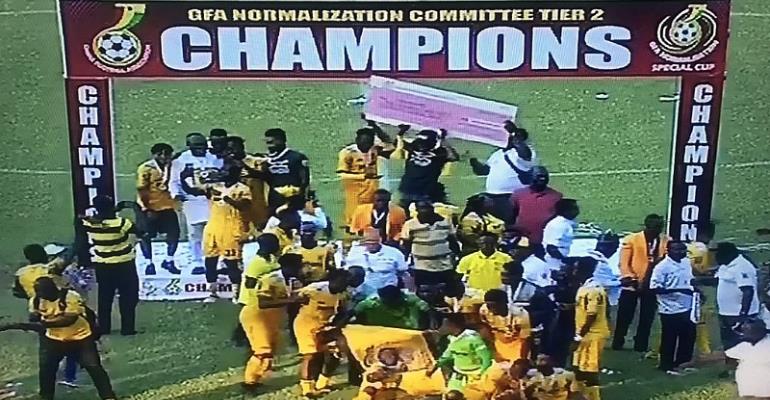 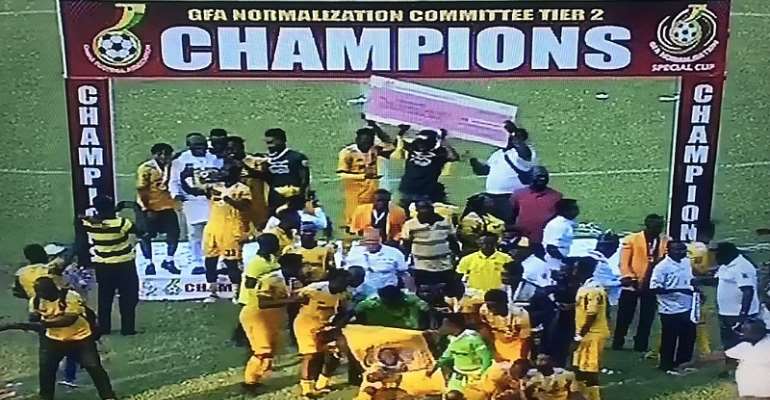 Obuasi Ashanti Gold has emerged as the champions of the tier 2 of the Ghana Football Association (GFA) Normalization Committee (NC) Special Competition after beating Nzema Kotoko 1-0 at the Cape Coast Stadium on Sunday, June 30, 2019.

The two teams, having qualified to the finals of the competition went into the game with high hopes of lifting the trophy to have the chance of playing in CAF’s lower-tier competition in the upcoming season.

The Miners who looked the favorites to lift the trophy left nothing to chance and made their intentions clear from the start of the first half as they dictated play and piled pressure on their opponent.

After failing to get onto the scoresheet, the Premier League side finally got rewarded on the 38thminute. Attacker Mark Agyekum took advantage of a decent chance and sent a low driven shot past Kotoko goalkeeper Evans Quansah.

From there on the tempo of the game increased with the eventual losers doing all they could in search of an equalizer to bring them level. They could, however, make no use of the few chances that came their way and went into the break on the losing side.

Ashanti Gold returned from the break and defended the lone goal to ensure they gave nothing to chance. Their resilient denied Nzema Kotoko any opportunity of getting back into the game. At the end of the 90 minutes, Mark Agyekum’s first-half strike was enough to hand the Miners their victory.

By virtue of the triumph, Obuasi Ashanti Gold will be representing Ghana in the next edition of the CAF Confederations Cup.