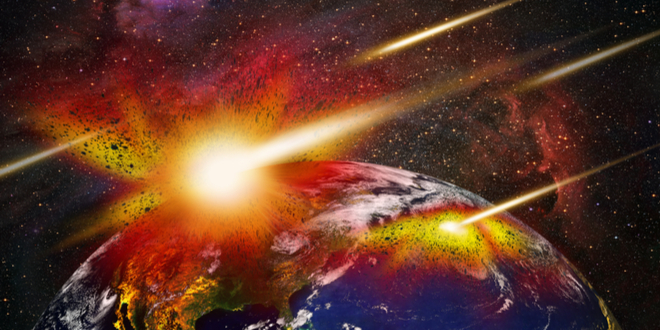 “You came forward and stood at the foot of the mountain. The mountain was ablaze with flames to the very skies, dark with densest clouds.” Deuteronomy 4:11 (The Israel Bible™)

Two Nibiru experts claimed that the recent eruption of Mount Agung in Bali is the result of the proximity of Planet X to the Earth. Though NASA still claims the theory is unfounded, seismologists are hard-pressed to find an explanation for the current wave of extreme earthquake and volcanic activity.

After a long period of intense seismic activity and warning signs, Mount Agung, on the Indonesian resort island of Bali, erupted on Saturday, spewing red-hot ash over 6,000 feet into the air, shutting down air traffic and stranding tens of thousands of tourists.

Experts believe a much larger, full-scale eruption is imminent, and the governor of Bali declared a state of emergency that will last at least until mid-December. The approximately 100,000 residents living within five miles of the volcano were ordered to leave. Agung’s last eruption in 1963 killed over 1,600 people.

David Meade, a Christian numerologist and author of  “Planet X – The 2017 Arrival”, announced to the media that the catastrophic volcanic eruption in Bali was due to the undetected approach of Nibiru, a large planet that many believe is approaching the earth undetected. The Nibiru theory states that the planet will collide with the earth in a cataclysmic end-of-days event.

“People are trapped in the island,” Meade told IB Times earlier this week. “Nibiru has an electromagnetic effect on the sun, and therefore the Earth. The core heats up and displaces magma.”

He also claimed these electromagnetic disturbances would generate tsunamis and earthquakes, while shutting down power grids around the globe.

Meade’s theories came into the spotlight when, early in 2017, he predicted Nibiru would appear before the end of the year, claiming the solar eclipse that transversed the United States in August was a harbinger of the cataclysmic arrival of Planet X. His theory was given a boost in October when NASA announced the discovery of  a new planet in the solar system.

Meade was critical of NASA’s denial of Nibiru’s existence.

“That’s called disinformation – it’s as old as history,” he was quoted as saying. “We’ll eventually get 40 days of advanced warning. Each nation will inform its own citizens.”

Yuval Ovadia, whose videos on Nibiru has garnered hundreds of thousands of views, bases his theories on classical Jewish sources. Ovadia agreed with Meade that the eruption in Bali was due to the effects of Nibiru and the planets orbiting it.

“The Talmud says that God the flood to the world in the generation of Noah by way of two stars that he added to the Pleiades constellation, affecting the earth,” Ovadia told Breaking Israel News. “The midrash (Torah commentary) explains that the addition of these stars caused water to come up from the ground and the mountains to spew out steam and fire.”

Ovadia explained that when God wants to act in the world, He will use the elements of nature to bring about change. Nibiru, Ovadia stated, is intended to usher in a new age.

“We are already seeing the effects of Nibiru, in Bali and all over the world,” Ovadia said. “The earth is heating up and there are many more earthquakes than ever before.”

Whether or not Nibiru’s electromagnetic influence is to blame, the world has seen an epidemic of seismic activity recently. California has had more than 700 tremors in the last 30 days and Yellowstone has had one of its most active seismic periods ever recorded with over  2,475 events since June. Mexico was hit by two devastating earthquakes in September. Two weeks ago, Iraq suffered a 7.4 magnitude quake, the worst in its history, killing over 350 people in Iran.

Ovadia disagreed with Meade on one major point. Meade initially predicted that Nibiru would arrive in October of 2017, but he later revised the date to September 23rd. Both dates have passed without Nibiru appearing, fueling criticism of the theory.

“When people mix the truth about Nibiru with lies, predicting a date that cannot be true, it leads people to think that even the truth is a lie,” Ovadia warned.

An apocalyptic vision of the eruption of Mount Agung would come as no surprise to the Balinese Hindus, who hold the mountain to be sacred and believe it will figure prominently into their end-of days eschatology.

Hindus respect all mountains as the dwelling places of the gods, with the mythological Mount Meru being the most sacred cosmological mountain. Agung, the highest peak in Bali, is believed to be the transplanted Meru. According to Hindu myth, the end of days will be a battle between a god-army and demon-army on the slopes of Meru that will darken the skies with dust and ash spewed into the air.

Experts predict this global trend of increased seismic activity will continue and even grow in the upcoming year. A recent study presented at the annual meeting of the Geological Society of America suggested that this year is an especially active time period for earthquakes and volcanoes.