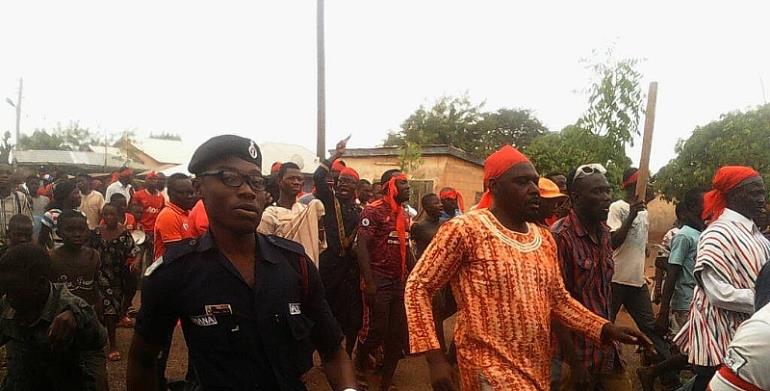 Hooded supporters of the ruling New Patriotic Party in the Northern region brandishing sticks and metal objects on Friday blocked roads and burned debris as an escalated gender based rebellion against women appointed as heads of Municipal and District Assemblies enters Day 3.

A wave of violent protests gripped some districts in the region resulting in heightened security from Wednesday shortly after the list of nominees was made public.

President Akufo-Addo per the list of the nominees picked four women to head four districts out of 26, the highest in the history of local governance in the region.

The last NDC regime had Hajia Mary Nakobo of Cheriponi as the only woman in former President John Mahama’s list of nominees.

Protesters at Savelugu, Tolon, Sagnarigu and Bole where all nominees were women, spontaneously flooded streets and angrily damaged party installations and private properties in a chaotic concurrent demonstrations in disapproval of the nominees.

Security forces in the troubled neighborhoods have been struggling to maintain calm and admonition by the regional minister, Salifu Saeed for restraints was ignored.

Protesters at Sagnarigu, Tolon and Savelugu have rejected the nominees and threatened mayhem after blaming regional executives and the President for failing to do “wider consultation”.

They have not given names of preferred candidates and are not challenging competencies of the nominees forcing gender advocates to believe the protests were to stifle women participation in governance, reports Northern regional correspondent Eliasu Tanko.

Police were forced to provide security for the rowdy rioters after an initial attempt to scuttle the illegal demonstration nearly turned bloody.

A leader of the protesters, Abdul Karim Zakaria in an angry tone said the nominee, Hajia Ayishatu Seidu would not be allowed to work in the district. He said she is an “alien” forced on them by local government minister, Hajia Alimah Mahama and Bugri Naabu.

“She is an alien in this system. She has never participated in any activity whatsoever as long as the NPP is concerned. She has never even made herself known… And because she is a friend to Hajia Alima Mahama she forced her on us… Hajia Alima and Bugri Naabu forced her on us, and I was thinking that they should rather take her to their constituencies to become the MCE”.

In Tolon where the Regent, a retired military strongman, Major Sulamana has reportedly rejected the nominee Hajia Amamata Iddirisu, Starr News sources said delegation were dispatched to the palace in a desperate bid to convince the chief to accept the nomination.